New Mustang Hits – With a Bullitt

We follow the tracks of the legendary Steve McQueen chase in the 2019 Mustang Bullitt. 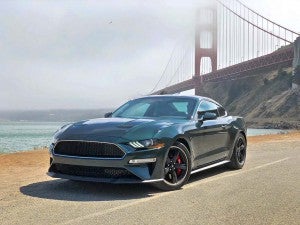 Two icons: the 2019 Ford Mustang Bullitt emerges from the fog by the Golden Gate Bridge.

The streets of San Francisco are eerily quiet on this early morning with the heavy fog that’s rolled in off the Pacific making it possible to imagine traveling back to another time, 50 years ago, when police Lieutenant Frank Bullitt burned rubber going after the bad guys in one of cinema’s most famous chase scenes.

It helps, of course, that we’re riding in the latest iteration of the Ford Mustang Bullitt, the limited-edition pony car meant to celebrate that iconic film and the car driven by star Steve McQueen. Like the original, our coupe is finished in Dark Highland Green, and it’s got a few other touches lifted from the original Bullitt Mustang, including the cue ball shifter knob. But Lt. Bullitt could have only dreamed about having the latest, 475 horsepower version of Ford’s 5.0-liter V-8 under the hood, as well as the magnetic ride control suspension that would make those legendary hilltop jumps a wee bit less jarring.

Temptation is there, but we’ve been asked to take things a little easy this grey morning. No jumps, no drifting, high-speed turns. After all, there’s no film crew on hand, nor the necessary permits and police escort holding back the crowds. No big deal, we’ve already pushed the limits driving through some of the back roads carving through redwood country south of Fog City.

(California Dreaming: Click Here for a look at the Mustang California Edition.)

Cars and cinema grew up together, and it’s the rare cop thriller that doesn’t pack in at least one chase scene. But few have come close to the raw, eye-grabbing energy of the Bullitt chase scene, says Danny Bilson. McQueen “saw it as a Western, with the car strapped on like a gun,” notes the Professor of Cinematic Arts at the University of Southern California. 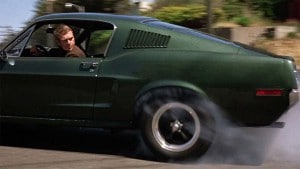 Steve McQueen burns some rubber during the legendary car chase in “Bullitt.”

What took weeks to film lasted barely 11 minutes on screen. McQueen, a serious sports car fan and occasional race driver, did much of the work himself, though two stuntmen did fill in for a couple of the riskier shots, Bilson explains, as he shows rare footage of the actually filming.

Read our review of the best Ford Factory Warranty options

The Mustang itself had a stellar launch when it debuted as a 1964-1/2 model, but the success of Bullitt was felt in Ford showrooms, as well as the box office, so it’s no surprise Ford has brought the special edition back on several occasions, most recently for the 2008 model-year. For fans hoping to see the Bullitt badge grace a new Mustang, the wait should be worth it.

Visually, the special edition is decidedly understated. One of the first things you’ll likely notice is the blackout grille, sans pony logo, surrounded by a thin chrome frame. There are also some subtle chrome accents around the wheels, grille and window. Also honoring the film, the 2019 Bullitt rides on torque thrust 19-inch aluminum wheels .There’s also a faux gas gap on the center of the rear with the original Bullitt logo. Two color choices are available: the original green or Shadow Black. 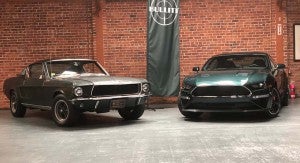 One distinctly modern concession is the use of bright red Brembo brake calipers. That offers the sort of stopping power Lt. Bullitt might have made good use of during that chase scene.

Inside, the Bullitt Mustang is largely stock GT, with the notable distinction of that cue ball shifter used to row the car’s six-speed manual gearbox. Recaro sports seats, meanwhile, keep you firmly in place during aggressive driving maneuvers.

The special edition is outfitted with the same standard gear as the Mustang GT Premium and the GT Performance Package, starting with that classic Mustang engine punching out 475 hp and 420 pound-feet of torque. 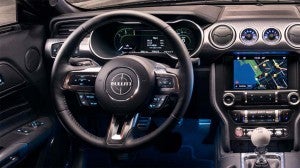 To get those numbers, Ford has opted for a new open air induction system, while adopting the intake manifold found on the Shelby GT350 with 87mm throttle bodies and optimized powertrain control module calibration. There’s also an active valve performance system that produces a satisfying burble at idle, and the sort of roar, under wide open throttle, that tells other drivers to pull over and let you by.

Spend just a few minutes inside the Bullitt – or any similarly equipped Mustang GT, for that matter – and you could be in for a surprise – especially if you haven’t driven one in a while. Ford’s pony car has always been quick off the line, but the latest iteration is transformative. To see just what the car could do, we shifted to Sport+ mode, switched on the G-Force gauge and headed out for Skyline Drive, wander off onto some of the twistier stretches winding through redwood country.

No, it’s not a true sports car. It won’t handle corners like the Ford GT, but as we drift off of Skyline Drive onto an otherwise anonymous stretch of tarmac we can’t avoid being impressed as we smoothly slalom through one corner after another, the G-meter, at peak, registering 1.2 Gs, the sort of numbers only a handful of exotics might have managed in the not-too-distant pass. 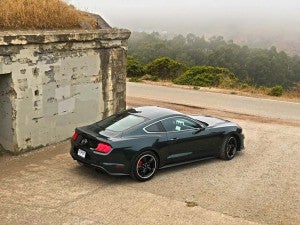 The magnetic ride control system gets much of the credit. It uses what, in technical terms, is known as magnetorheological fluid. Essentially, the shock dampers are filled with an oil containing microscopic magnetic particles. Apply a current to the system and you can go anywhere from squishy soft to rock solid in the time it takes for the Bullitt to travel two inches at 60 mph. Better yet, each shock can be damped independently, enhancing the car’s cornering capabilities.

One of the most pleasant surprises, however, comes in the form of that six-speed manual. For many of today’s drivers, having no available automatic might seen intimidating, even off-putting — especially since many of today’s automatics are actually faster than their manual alternatives. But if you know how to use a clutch you’d be making a mistake not to check out the Bullitt package.

The clutch has just the right balance. It’s not light, but neither will it leave your left leg sore if you’re stuck in traffic. Meanwhile, Bullitt’s rev-matching makes it easier to slam a shift home without the jerkiness you experience on many stick models. It’s a lovely package and could breathe some desperately needed life into the dying MT.

It is, all-in-all, the sort of car a driving enthusiast like Steve McQueen, never mind a cop like Frank Bullitt, would have really appreciated, had we been able to emerge from the fog a half-century ago. 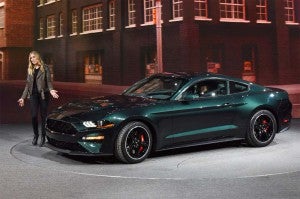 What’s perhaps most impressive is how the latest generation Ford has been able to pick up on the cues of that ’68 model. As a bonus for those who attended last week’s Bullitt drive event, Ford rolled out what is believed to be the only surviving versions of the two GT Fastbacks Warner Brothers used for the film. Known as car 559, it was purchased by one of the studio’s employees later that year and then sold to a New Jersey police detective. It ultimately landed in the hands of Robert Kiernan, who bought it in 1974 for $6,000 and, for a while, used it as his family car.

Three years later, Kiernan and wife Robbie declined an offer by McQueen to buy the car. But it eventually was stuck in a garage when they moved to Kentucky in 1980 and went for decades without being run again.

Late last year, the car was shown to Steve McQueen’s granddaughter, Molly, who then helped Ford introduce the 2019 Bullitt at the Detroit Auto Show last January.

The new model is just rolling into showrooms and, with delivery charges, starts at $46,595.