Tesla CEO Elon Musk has issued an apology for calling one of the divers involved in the rescue of a soccer team caught in a Thai cave a “pedo,” shorthand for pedophile.

The overnight tweet marked one of the rare times the South African-born executive has retreated from what have become increasingly erratic and aggressive comments that, in recent months, have taken aim at journalists, Wall Street analysts, regulators, and even the victim in a fatal crash involving one of Tesla’s battery-electric vehicles.

Musk, much like President Donald Trump, has become a regular user of Twitter, developing a broad audience and a loyal fan base for himself and for his company. But as with the president, some of Musk’s tweets have begun raising eyebrows and this week’s attack on diver Vernon Unsworth caused collateral damage to Tesla’s stock which tumbled when Unsworth threatened to sue the eccentric billionaire.

(For more on Musk’s war of words with diver Unsworth, Click Here.)

In recent weeks, Musk has himself begun taking heat for what one major Tesla investor called his “concerning” actions. “Your behavior is fueling an unhelpful perception of your leadership — thin-skinned and short-tempered,” Gene Munster, a managing partner at the venture capital firm Loup Ventures wrote in an open letter to the Tesla CEO. 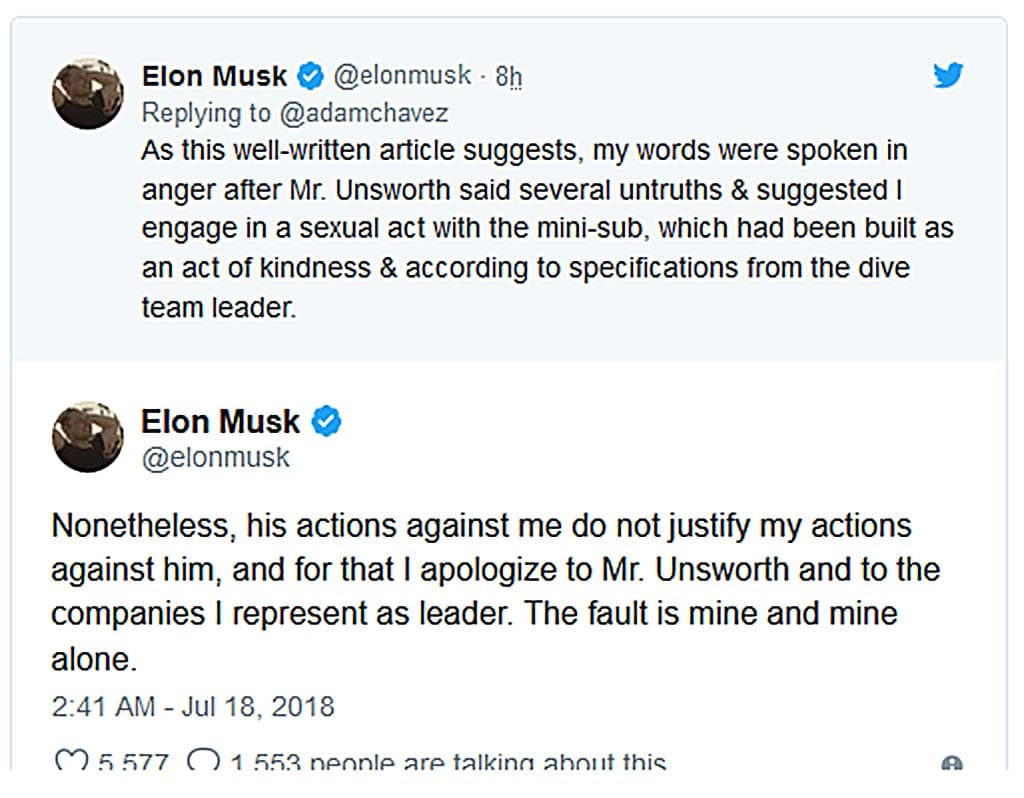 Munster and other critics have cited a number of recent, controversial  actions by the ever-blunt Musk, who not only runs the battery-electric automaker but the rocket company SpaceX:

The latest incident has generated some of the sharpest backlash against the 47-year-old Musk. The Tesla CEO had said he would send a “kid-sized” sub to assist in the rescue of a soccer team trapped in a flooded Thai cave. The offer was rejected and dubbed by some a publicity stunt. Expert diver Unsworth bluntly said it never would have worked in the conditions rescuers faced.

In a series of back-and-forth tweets, Musk labeled Unsworth “pedo guy,” and when challenged by a Twitter follower, the executive responded, “Bet ya a signed dollar it’s true.”

Musk soon deleted the tweets, but Unsworth quickly threatened to file suit and Tesla stock took a sharp, if short-lived dive. Then, early Wednesday morning he issued an apology, tweeting that despite Unsworth’s initial criticism, “his actions against me do not justify my actions against him, and for that I apologize to Mr. Unsworth and to the companies I represent as leader. The fault is mine and mine alone.”

Whether the apology will be enough to satisfy the growing list of Musk’s critics is unclear, especially in an era when most – though not all – politicians and business leaders are facing a much tougher and less tolerant climate when it comes to aberrant comments and behavior. Just this past week, Papa John’s founder and Chairman John Schnader was ousted after making racist comments during a conference call.

In an interview on Bloomberg Television, venture capital executive Munster tried to balance his concerns with his broader support for both Musk and Tesla, telling his interviewer that Musk, “has a great opportunity but he is jeopardizing the opportunity,”

Those who have known Elon Musk for a long time say they aren’t really surprised by the latest series of gaffes. “Elon Musk wants to save the world. It’s the people he’s not too fond of,” a former top lieutenant told TheDetroitBureau.com last year. That exec, who asked not to be mentioned by name, now works for another automotive start-up.

Tesla itself has seen a higher-than-normal rate of attrition at both the senior executive level and, in particular, on the public relations front. One PR veteran who left after only a short stint privately vented frustration at a CEO who effectively ignored the advice of those hired to help craft the corporate message – and ensure Musk himself presented his best face to the world.

Intriguingly, the executive, who made his first fortune as a cofounder of PayPal, has never denied he walks the edge. In the opening line of the bestselling biography of Musk penned by author Ashley Vance, the Tesla CEO is quoted asking, “Do you think I’m insane?”

Considering the increasingly odd behavior Musk has exhibited in recent months, there would likely be a number of folks who would have to pause before answering.

There are those who defend Musk and note that he has faced enormous pressure in recent months, Tesla racking up record losses as it struggled to fix production problems with the Model 3. But even supporters say the Tesla co-founder needs to clean up his act.

“I do think he’s going to slow down,” Munster said in his TV interview, “and I am willing to bet that his behavior on Twitter is going to change going forward.”