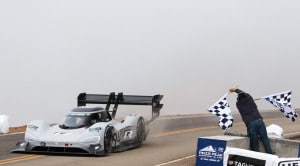 Volkswagen and the I.D. R Pikes Peak made history at the Pikes Peak International Hill Climb last weekend with its purpose-built, battery-electric racer by winning the overall race and setting a new record or two.

Romain Dumas, who had driven other electric race cars before, but not on Pikes Peak, piloted the the 500-kW I.D. R Pikes Peak to victory over a field of cars with conventional drivetrain technology as well as EVs.

In doing so, he not only broke the previous record for electric vehicles, but also bettered Sébastien Loeb’s all-time record from 2013 – by a full 16 seconds. Dumas’ new record of 7:57.148 minutes. “The I.D. R Pikes Peak is the sporty forerunner of Volkswagen’s I.D. family. Today, we saw what this technology is capable of,” said Dr. Frank Welsch, member of the Board of Management of the Volkswagen Passenger Cars brand with responsibility for technical development. 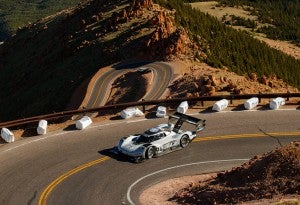 The I.D. R Pikes Peak wends its way up the mountain on its way to a new record.

“Every Volkswagen employee can be extremely proud of today’s result. I congratulate the team from the bottom of my heart. With a combination of outstanding engineering skills, passion and commitment, the team has managed to create a fantastic racing car in just eight months. The Volkswagen I.D. R Pikes Peak has now set the fastest time in the history of this hill climb, which spans more than 100 years – that speaks volumes for electric mobility.”

The 12.5-mile long course is known to be among the most treacherous in the world with 156 corners while heading up into ever thinning air … which isn’t a problem for the I.D. R Pikes Peak since it requires no oxygen.

Not bad for the company’s first fully electric supercar, which was unveiled in Alès, France in April, with only one goal: beating the existing electric car record of 8:57.118 minutes by nearly a full minute.

This battery-electric supercar certainly had the specs to topple the record, weighing less than 2,500 lbs and produces 680 horsepower and 479 lb-ft of torque, giving it a 0-60 mph time of 2.25 seconds, which is faster than Formula 1 and Formula E cars.

(Click Here for details about Volkswagen being fined $1 billion by the German government.) 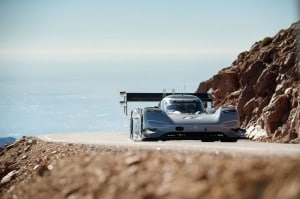 The I.D. R Pikes Peak was VW's first run with a battery-electric racer up Pikes Peak.

In addition to finding ways to make it fast, the team had to expand its technological expertise to tackle “what if” situations that often occur during the race. The race can be delayed by weather conditions, necessitating the ability to recharge the vehicle with 20 minutes, in accordance of the rules of the race.

The electricity required was provided by generators at the foot of Pikes Peak. Glycerol, which in chemical terms is a sugar alcohol, was selected as the fuel.

A by-product of the manufacture of biodiesel, for example, Glycerol combusts with virtually no harmful exhaust fumes or residues. Glycerol itself is non-toxic and is even permitted as an additive in the food and cosmetics industries.

Volkswagen pointed to it partners as being critical to the record run, particularly Volkswagen R, ANSYS, Michelin, Integral e-drive and OMP. With Volkswagen R, the I.D. R Pikes Peak received a sporting seal of approval from the outset, which it more than earned on its record-breaking run, if not before.

(To see more about the German court ruling allowing a ban on diesel engines, Click Here.)

ANSYS also made a vital contribution to the success of the project by providing support with the software simulations. Another key factor was tire maker Michelin’s years of experience on Pikes Peak, which allowed them to provide tire technology perfectly tailored to the demands of the hill climb.