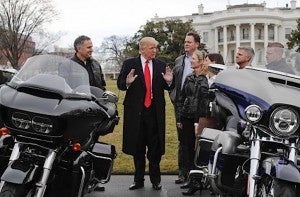 President Donald Trump has gone from being supportive of Harley-Davidson to threatening the company with a "huge" tax.

After hailing Harley-Davidson earlier in his administration as an example of what makes American great, President Donald Trump has now gone on the attack, threatening to slam the Wisconsin-based motorcycle company with “a big tax” if they go ahead with plans to move some of their production abroad.

The turnaround comes in response to Harley’s Monday announcement that to avoid being caught up in the escalating Trump trade war it would have to move some of its motorcycle out of the U.S. The company said tariffs and counter-tariffs are adding as much as $2,200 to the price of every bike it ships to the European Union.

The fact that his steel and aluminum tariffs might be playing a factor in the decision did not appear to matter to the president who issued a series of tweets blasting its planned move and threatening that, “If they move, watch, it will be the beginning of the end – they surrendered, they quit! The Aura will be gone and they will be taxed like never before!”

Exactly what that means isn’t clear. Harley has not offered any details about its planned production shift, nor whether it might subsequently ship some foreign-made motorcycles back to the U.S., where they could face new tariffs.

(“Nearly every segment of auto industry” threatened by Trump trade tactics. Click Here for the story.) 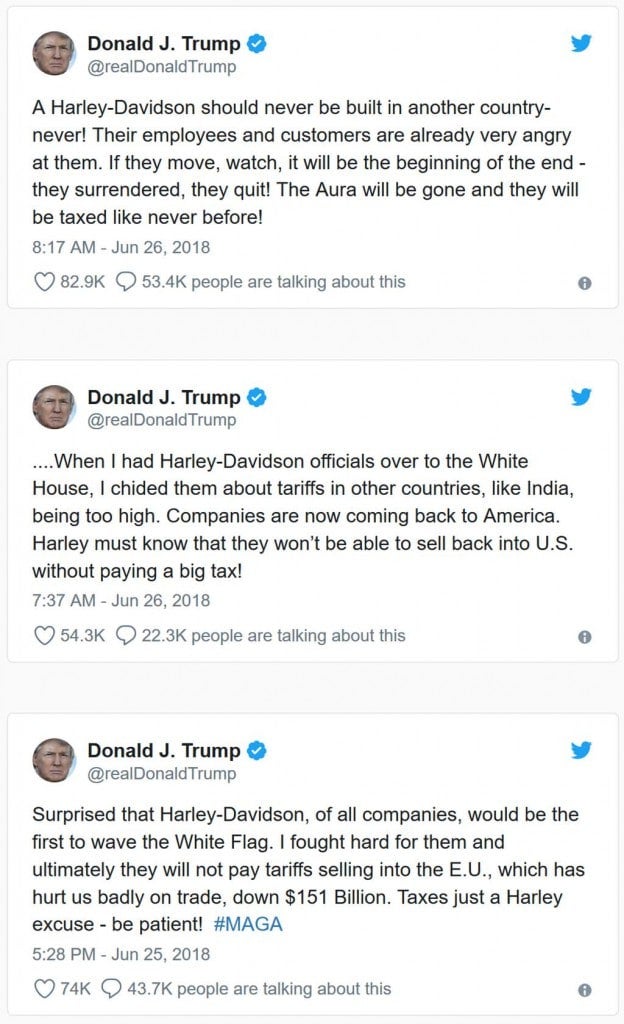 What the company did note on Monday is that some tariffs affecting the company, such as Trump-enacted duties on foreign steel and aluminum, along with new, 31% tariffs being imposed by the EU, will cost it about $100 million annually, or roughly $2,200 for every bike shipped to Europe.

“Harley-Davidson believes the tremendous cost increase, if passed onto its dealers and retail customers, would have an immediate and lasting detrimental impact to its business in the region,” the company said in a Securities and Exchange Commission filing, “reducing customer access to Harley-Davidson products and negatively impacting the sustainability of its dealers’ businesses.”

Ironically, Harley has been a prime example of the sort of business candidate Donald Trump said he wanted to see in America, the company exporting 43% of its production, with a goal of increasing that to 50%. The EU alone accounts for about 16% of the company’s volume, about 40,000 motorcycles last year.

It remains to be seen where Harley might shift some of its U.S. production, but it was already planning to open a small plant in Thailand to give it access to that country’s large motorcycle market. Imports are relatively limited due to 60% tariffs. The company could opt to expand production there, or use one of the other plants it operates in Brazil, India, Italy, Portugal or Spain. An entirely new site could be added, as well.

Harley can ill afford to get caught up in a trade war that reduces global sales. The company earlier this year announced it would close a factory in Kansas City, Missouri, a plant that currently employs 800 workers. Production will be consolidated into a facility in York, Pennsylvania.

The motorcycle maker has come under fire from some of those employees who said they felt betrayed by the move which came after Harley announced it would use a large chunk of the money it got under the Trump Administration’s tax bill to increase shareholder dividends and buy back $700 million of its own stock.