But CEO Musk doesn’t explain what that actually means.

Tesla Version 9, an apparently major software update to the operating system used for the automaker’s vehicles, will debut in August and, according to CEO Elon Musk, add “full sell-driving” capabilities to the controversial Autopilot system.

The news, announced in a Musk tweet late Monday, comes at a time when earlier versions of the semi-autonomous Autopilot system have come under intense scrutiny. A preliminary report by the National Transportation Safety Board has raised serious concerns about how it functioned in the moments leading up to a fatal crash of a Tesla Model X SUV in California earlier this year.

But Musk has repeatedly downplayed such concerns — even pointing his finger at owners who may not have used Autopilot properly – while promising a far more advanced version of the system was coming. And in his late Monday tweet, Musk said, “to date, Autopilot resources have rightly focused entirely on safety (but) with V9, we will begin to enable full self-driving features.”

(Porsche ready to take on Tesla with debut of 1st all-electric model. Click Here to check out the Taycan.)

Exactly what that means is uncertain, and even the use of the term, “self-driving,” could cause problems, according to some observers, if the updated Autopilot system is not able to operate entirely hands-free. Tesla is under fire from critics such as the Washington D.C.-based Center for Auto Safety, and California’s Consumer Watchdog, for the very name, “Autopilot,” which the groups claim can lead owners to believe the system already has fully hands-free capabilities. 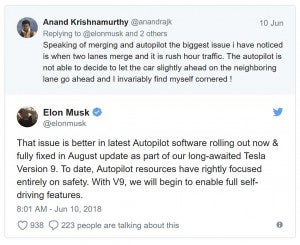 But proponents were quick to celebrate Musk’s promised upgrade, with Tesla stock surging in after-hours trading.

Tesla is just one of many automakers looking to develop fully autonomous capabilities, but there is a lack of consensus of what that means.

When Tesla released the original version of Autopilot, some owners appeared to operate their vehicles as if they were fully autonomous. One posted a video of himself jumping into the rear seat while the car continued to drive on its own. Even CEO Musk and his wife were shown in a picture with their hands out of a Tesla sedan’s windows, indicating it could operate hands-free.

Tesla’s current version of Autopilot is seen as having what, in industry terms, is Level 2 capability, meaning that when switched on it can adjust the speed of a vehicle to maintain the flow of traffic. It also has the ability to retain its place in a lane. But despite a series of updates to the software, it still requires an owner’s hands remain on the wheel, the owner ready to take full control in an emergency, or when advised to do so by a system warning.

In the case of the March crash that killed 38-year-old Walter Huang, the NTSB determined that “for the last 6 seconds prior to the crash, the vehicle did not detect the driver’s hands on the steering wheel.” It subsequently accelerated after clearing traffic and slammed into a barrier on U.S. Highway 101, hit two other vehicles and burst into flames.

(Click Here for more on the new NTSB report.)

Another crash, in Utah, has been tentatively blamed on Autopilot, the owner receiving serious leg injuries when her vehicle slammed into a parked fire truck after she had switched the system on and taken her hands off the wheel. Several other crashes have also been linked, at least tentatively, to Autopilot.

After a May 2016 crash in Florida that killed a former Navy SEAL, Autopilot took partial blame in an NTSB probe. The automaker subsequently updated the system, replacing some of its hardware, as well as modifying its software. It has continued upgrading the operating system using its capability to send out over-the-air, or OTA, updates to its vehicles.

Musk has promised that Autopilot eventually would allow full hands-free driving. The ultimate industry goal is to reach Levels 4 and even 5, which could permit fully driverless operation, meaning no one behind the wheel. But, what Tesla is expected to deliver would, more likely, move it into the realm of what is referred to as Level 3 technology. Here, a motorist would have to remain behind the wheel and at the ready, though they could take their hands off the wheel for extended periods.

But the concern is whether Tesla’s vehicles will be up to doing that safely. One reason for such caution is the hardware used on products like the Models S, X and 3. They have cameras, radar and sonar sensors. But most experts believe an even more advanced 3D laser technology, known as LIDAR, will also be required, along with hyper-detailed roadmaps. Musk has said LIDAR is not a prerequisite for Tesla.

Musk gave a hint of what could be coming with V9 in a tweet responding to an owner’s complaint that his Tesla had trouble in certain high-traffic merging situations. The CEO responded, “”that issue is better in latest Autopilot software rolling out now & fully fixed in August update as part of our long-awaited Tesla Version 9.”

Musk has been known to exaggerate and even post jokes in his Twitter feed that are often mis-read as serious comments. He left many observers scratching their heads when, over the past weekend, he posted hints about what he claimed would be a special feature for the next-generation Tesla Roadster now under development. Dubbed the “Space X Option,” it is named for the rocket company Musk also controls.

The idea of mounting rockets on a car being used on public roads seems highly unlikely, but considering Musk recently started selling flamethrowers to supporters of his tunnel-making The Boring Company, he is just unpredictable enough that such ideas can’t be dismissed outright.

(Safety groups critical of name Autopilot and want it banned. For the full story, Click Here.)