UAW Leaders Struggling With Credibility Issues in Wake of Scandal 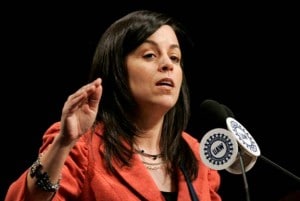 UAW's Cindy Estrada was part of an investigation by federal officials about the potential misuse of union funds.

With their credibility damaged by the worst scandal to ever rock the United Auto Workers’ top executive board, union leaders are scrambling to explain changes in the union’s contract with General Motors that will allow the outsourcing of job at GM assembly plants in Lordstown, Ohio, and Orion Township, Michigan.

“You deserve to know the facts about recent outsourcing at Local 5960 Lake Orion and Local 1112 Lordstown,” Cynthia Estrada, the UAW vice president in charge of union’s GM Department, said in a letter to a union members.

“This was a decision agreed to by the involved local, regional and national leadership. Everyone agrees that this situation sucks. But what would suck even more would be to have GM shut down any of our plants and devastate hundreds of our members’ lives and the communities where those plants exist,” said Estrada, who noted GM car production has slashed by 20%.

“Due to these conditions, GM recently came to us to consider changes at the small car plants that would make them more competitive – which means keeping jobs in our plants. Due to GM’s track record in plant closings, we met with the Company to look at vehicle content, marketing, suppliers and labor,” she added. 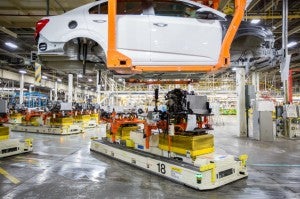 Estrada said GM and the union recently negotiated agreements, “We believe will put the plant in a better position to stay open.”

“Yes, the MOUs make changes that impact some jobs that our traditional members perform. But the local, regional and International agreed that we needed to keep product in our plants. And in the case of Lake Orion, we needed to get future technology into a UAW GM plant – and we did,” she said.

Not far in the background, however, is the unfolding scandal involving a federal investigation into the use of joint training funds at Fiat Chrysler Automobiles, which has expanded to joint funds at GM and Ford Motor Co.

Former UAW Vice President Norwood Jewell, who headed the union’s FCA department until his sudden departure last year, recently had his home searched by federal authorities. Estrada and Gary Jones, the UAW nominee to succeeded Dennis Williams, as UAW president, have also been tarred by the scandal though they have not been charged with any criminal activity.

(Click Here for details about the Court cases exposing UAW to more charges by employees.)

UAW President Dennis Williams said he believes that the FCA-UAW scandal was a one-time event.

Estrada’s conduct was put under the microscope when federal investigators began looking GM’s joint fund. The investigation may have cost the union a seat on GM’s board — a point disputed by the union officials. Jones used a bus service during a FCA-UAW conference in Palm Springs in 2015 that was paid for through the joint fund, according to federal investigators probing the misuse of the accounts.

From posting in various union websites, particularly some dissident sites closely watched by union members, the UAW’s leadership is coming under heavy criticism that is bound to have an impact on their relations with Detroit’s automakers now and in the future.

“When is enough enough? We keep giving and they just keep taking. Majority of us have been through this more than once this isn’t our first rodeo. They tell you to give up this and take that they’ll make an investment and keep you here.

“When in reality the money is spent on lipstick because it’s nothing but a tax write-off. Then in the end they close it and move it anyhow. GM does nothing spur of the moment they know years in advance what their next moves are. They say I see it time to call some bluffs and stand on our feet and not our knees. They want a fight let’s give them a fight. We have been paying extra union dues strike fund should be enough,” one post noted, which seemed to sum up the sentiment on social media.

“We want back our jobs we outsourced we want our cola we want our raises,” the post added.

For its part, GM declined to comment on the contractual changes or outsourcing of jobs at Lordstown and Lake Orion.

“We staff our plants under the terms of the labor agreements that we have with the unions that represent our employees, based on the terms agreed to for the type of work being done. For competitive reasons, I cannot provide any additional details relative to staffing,” GM spokeswoman Kimberly Carpenter said in an e-mail.