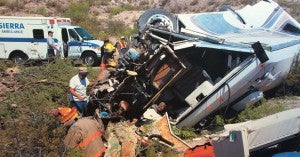 A motorhome crash that may have been linked to the Goodyear G159 tires.

Defective Goodyear motorhome tires may have led to as many as 95 deaths and injuries, according to a new probe launched by the National Highway Traffic Safety Administration.

The potential problem, which played out over the past two decades, came to light after a Phoenix judge unsealed previously closed settlement agreements. The tires, which were sold between 1996 and 2003, were initially designed for use on delivery trucks, not for vehicles operating at freeway speeds, according to the data.

“That information — primarily concerning the tire’s design, its testing, the decision to market it for use on motor homes, and the adjustment data generated by consumer experience with it — should be made public because it relates to and reveals a substantial potential risk to public health or safety,” Maricopa County Superior Court Judge John Hannah ruled in releasing the information that had been sealed as part of settlements between Goodyear and victims.

Judge Hannah ordered them released as the result of a lawsuit, Haeger v Goodyear, that alleged that the tire manufacturer not only sold defective tires but knew about the problem and intentionally concealed it. While the case was settled in 2017, the documents remained sealed until the Washington-based Center for Auto Safety intervened.

Those seeking to unseal the documents alleged that the tire company had used the settlements to hide information about the potential defect.

The Phoenix judge unsealed Goodyear data claiming it was in the public interest.

“Goodyear’s need to maintain the confidentiality of the information or materials produced pursuant to the protective order does not come close to outweighing the public’s need for access,” the court wrote.

The documents have not yet been released publicly, pending an appeal of Judge Hannah’s ruling. Meanwhile, the company is denying that the tires, known as Goodyear G159, were prone to failure when used on Class A motorhomes. And it says it is “fully cooperating” with the NHTSA investigation. “We continue to believe that there is no safety defect,” the tire company said in a statement.

Approximately 160,000 of the tires were produced. Federal regulators are focusing on just 40,000 of them. The agency has not explained why the focus is limited, but many of the G159s were used for other types of vehicles, including delivery trucks that normally operate at slower speeds. 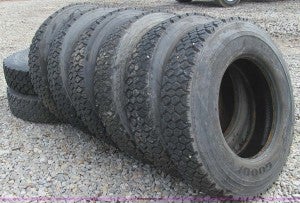 Goodyear, however, reported only nine claims to the government, according to NHTSA, involving one death and 13 injuries.

In a related, 2012 case, a federal judge declared that Goodyear had made “repeated, deliberate decisions” to both “delay” and “conceal” documents related to allegations involving the G159 tires.

The Center for Auto Safety echoed that in its response to Judge Hannah’s ruling, alleging the tiremaker had used settlements with victims to conceal defect information.

“This decision is a rare example in today’s judicial environment of a court protecting people over the auto industry,” said CAS Executive Director Jason Levine.  “For too long we have seen this industry hide information about defects which, if they had been made public, would have saved lives and prevented serious injuries.”

Goodyear has until May 4 to respond to the NHTSA request for information but could seek a delay.

(Tesla hit with NLRB complaint over mass firings. Click Here for the latest.)