Model provides look at future of the M8. 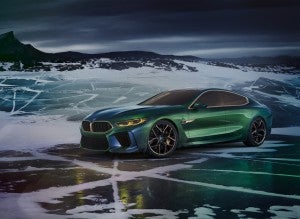 “The BMW 8 Series will take over as the new flagship model of the BMW line-up and, as such, combines unsurpassed sportiness and elegance,” said Adrian van Hooydonk, senior vice president, BMW Group Design.

“The BMW Concept M8 Gran Coupe offers a look ahead to the most exotic and alluring variant of the new BMW 8 Series,” they added.

He added the concept illustrates the meaning behind the letter “M” at BMW in impressive style. It stands for “more,” more of everything. As well as dynamic excellence, the BMW Concept M8 Gran Coupe embodies a new facet of luxury for the BMW brand – ultra-sporty, extroverted and polarizing, he said.

(BMW rolling into Geneva with multiple debuts. Click Here for the story.)

“The BMW Concept M8 Gran Coupe is designed to stir things up, to polarize – it should move you emotionally,” explains Domagoj Dukec, Vice President Design BMW M and BMW i. “With this car we want to reach people who are looking for something special and who want to stand out from the crowd. Here, BMW M is unmistakably taking luxury out of its comfort zone,” he said.

Like the BMW Concept 8 Series before it, the BMW Concept M8 Gran Coupe shows off BMW’s new design language with expressive surfacing that accentuates the car’s dynamism more vividly. A small number of precise character lines underline the graphic arrangement of the surfaces.

Low to the road with a broad stance, the front end of the BMW Concept M8 Gran Coupe hints at exceptional performance while the surfaces and precise contours point to the driving capability under the skin.

The face of the new BMW 8 Series is evident in the new concept’s front-end graphic.

The contours of the kidney-shaped radiator grille broaden as they descend towards the road, emphasizing the car’s low center of gravity. As on early BMW coupes, the kidney elements are linked by an unbroken grille surround, creating a large single element.

The headlights are positioned slightly higher than the kidneys and give them the impression of sitting lower, which further emphasizes the car’s closeness to the asphalt. In contrast, the gold-colored kidney surround brings an added air of exclusivity to the front end.

(Click Here to check out the new BMW X2.)

Meanwhile, brawny air intakes in carbon-fiber-reinforced plastic guide the air to where it is required.

Even when viewed from a distance, the proportions of the BMW Concept M8 Gran Coupe enhance the car’s character. A long wheelbase, long hood, flowing roofline and short tail create sporty coupe silhouette. The surfacing reaches a climax in the car’s shoulders around the C-pillars above the rear wheels.

The rear of the BMW Concept M8 Gran Coupe has the visual impact for which M is renowned, and the wide track and flared wheel arches hint at the car’s performance capability.

Horizontal lines break up the rear end, allowing the area below the rear spoiler to catch more light and adding extra visual agility. The bumper picks up the front apron’s dynamic theme. The prominent diffuser and two sets of familiar M twin exhaust tailpipes together send out a clear message of absolute performance.

The striking exterior of the BMW Concept M8 Gran Coupe combines the core values of BMW M with elegance and luxury to create a new and captivating form, and reveals a new and exciting facet of BMW M. The new model sees the BMW Group looking ahead to the BMW 8 Series Gran Coupe and BMW M8 Gran Coupe, which will be presented during the course of 2019 and round off the BMW 8 Series family, BMW representatives said.