Adding some more sport to the big Dodge sport-ute. 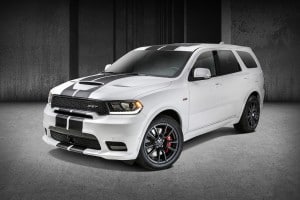 The Dodge Durango SRT gets some upgrades for 2018, including new dual-center exterior "racing" stripes.

Considering the near-blizzard conditions soon to descend upon Chicago, Dodge may have picked a good time to offer up an updated version of its Durango sport-utility vehicle.

The roomy crossover, occasionally referred to as the “man-van,” has traditionally balanced a more macho-male driving dynamic with the functional utility of a large ute that all members of the family can appreciate. For the Windy City unveiling, Dodge is putting the spotlight on the sportiest Durango SRT edition, offering a handful of upgrades – though it sticks with the current, 475-hp Hemi V-8.

“Our Dodge//SRT performance enthusiasts are always looking for ways to make their vehicle their own,” said Steve Beahm, head of Passenger Cars, and the Dodge brand said, ahead of the Durango debut. The latest updates, he added, are meant to “make Durango even more fun to drive.”

(FCA arguing about viability of a midsize pickup. Click Here for the story.) 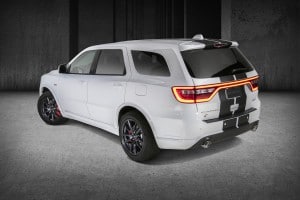 The 2018 Dodge Durango is also getting an optional interior upgrade for the SRT model that gives it a premium-wrap instrument panel, a suede-like Dinamica headliner, and a variety of paint and carbon-fiber trim details. The SRT Interior Appearance Group package is now available for $2,495.

While the Durango SRT sticks with its familiar, 475-horsepower Hemi, buyers can opt for a new performance exhaust system – which is also going to be an option for the Durango R/T. The stainless steel system is said to improve both flow and sound, enhancing the already enticing roar of that big V-8. The package costs $1,595 for the R/T and is already available for order, though it won’t debut on the SRT until the second quarter – and it carries an $1,850 option price.

(Click Here for details about a Durango brake recall.)

Of course, performance is measured in more ways than just 0 to 60 times, and the new Durango SRT can now be ordered with a modified spring package that will put you about 0.6 inches closer to the ground. It’s aimed at reducing squat during hard launches and nosedive under hard braking, while also improving aero and lowering the big SUV’s center of gravity.

Developed by Fiat Chrysler’s Mopar division for Dodge, the upgraded spring package will go on sale in March for $325.

Dodge bills the Durango SRT as the fastest and most powerful three-row SUV in its segment, with an NHRA-certified quarter-mile run of just 12.9 seconds. It also tops the segment with 8,700 pounds of towing capacity.