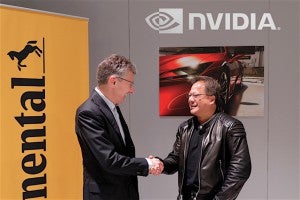 Continental AG, the giant automotive supplier, and Nvidia, one of Silicon Valley’s fast-growing tech companies, are planning to combine their talents on system for self-driving cars.

The goal, the latest in a string of partnerships between technology and automotive companies, expects to have a product ready by 2021. Nvidia has already become a supplier of choice to customers in the automotive industry, such as Audi, that also have long-standing links to Continental.

The companies said the system will be used for driver-assist safety features all the way up to cars with no steering wheel or pedals. Nvidia, based in Santa Clara, California, makes computer processing units and artificial intelligence, or AI, software that reads sensors and makes decisions for autonomous vehicles.

Continental makes auto parts including software and cameras, radar and laser sensors and its advance driver assistance features such as blind spot detections, lane departure warnings and others are widely used by a variety of automakers in North America, Asia and Europe.

(Automakers could be left out of the development of autonomous vehicles. Click Here to see how.)

The partnership enables the development of AI computer systems scaling up from modest Level 2 features to full Level 5 self-driving capabilities, where the vehicle has no steering wheel or pedals.

Dedicated engineering teams from each company will work together to develop self-driving solutions based on the Nvidia drive platform, which includes the company’s new Xavier chip, claimed to be the world’s highest performance system-on-a-chip, as well as Nvidia’s operating system and autonomous vehicle software stacks.

(Click Here for more about BCG’s prediction that 50% of vehicles will be electrified by 2030.)

The system will use Continental’s experience in system and software engineering and integrate a range of Continental sensor technologies including radar, camera and high-resolution 3D LiDAR.

“The vehicle of the future will be a sensing, planning and acting computer on wheels. The complexity of autonomous driving requires nothing less than the full computational horsepower of an AI supercomputer,” said Continental CEO Elmar Degenhart.

(A substation on every corner? Mass EV charging presents unique challenges. Click Here for the story.)

“We now have all the key elements in place to take AI self-driving cars from development to mass production,” said Jensen Huang, founder and CEO of Nvidia. “Our newly arrived Drive Xavier processor, extensive Nvidia Drive software and cloud-to-car approach for testing, validation and functional safety. Combined with Continental’s expertise and global reach, we will bring autonomous cars to the world.”