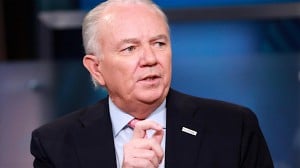 AutoNation CEO Mike Jackson believes that truck sales are going to suffer a bit at the expense of rising EV sales.

Seven of every 10 vehicles sold in the U.S. could soon be a truck the but continuing shift to pickups and sport-utility vehicles is not going to disrupt the growing presence of electric vehicles that will be on the road in the next decade, according to Mike Jackson, chief executive officer of AutoNation, who has earned a reputation as one of the industry’s seers.

Jackson told The Automotive News World Congress also said despite dire warnings to the contrary, car dealers will survive as will luxury brands during what promises to a sweeping transformation of the entire automotive landscape.

The change will be motivated by the drive towards autonomous vehicles and steady increase in electrification, he said. “We are an industry on the verge of one of the most exciting era,” said Jackson, who noted the new technology will help the industry address two critical social issues, pollution and the highway fatalities.

“We’ve passed an inflection point with electrification,” he said. Government mandates and a sight line to profitability that didn’t exist five years is driving the move into electric vehicles, he said.

China is spurring the transformation with its EV mandates and with China now demanding electric vehicles the State of California isn’t going to relent in its demands for EVs while European Union has take aim at curbing pollution from vehicles.

There are still great challenges in terms of ranges, re-charging and durability but manufacturers have pivoted to meet this global mandate, he said. “By 2030, 20% of the vehicles sold in the US will be battery electric vehicles,” he said.

The shift to electric vehicles will create new opportunities for dealers.

(Click Here to see why GM’s Barra is optimistic that NAFTA will survive.)

“Electric and autonomous are the most expensive and complicated vehicles ever built and only pro-active maintenance system similar to that used for aircraft will be required,” he said. This is one of the areas that AutoNation is preparing to enter with its nationwide system of dealerships.

“Yes, we’re at an epic moment where we can change the amount of pollution and amount of fatalities associated with our industry,” he said.

“There is no going back,” added Jackson.  At the same time manufacturers are preparing to take the “enormous profits” they have earned from selling trucks and SUVs, – as much as $50 billion – and pour into the research and development into electric vehicles.

(To see a little more about what FCA’s Marchionne had to say about 2018, Click Here.)

“The design issues have actually been figured. There will be more bumps but in another 10 or 12 years battery electric vehicles will be between 15% and 20% of the market and we will be selling them,” he said.