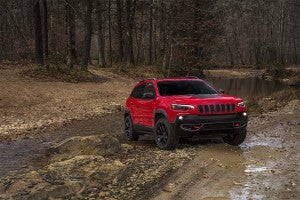 The redesigned Jeep Cherokee retains its off-road capability while getting a fresh new look for 2019.

Even though they are made Toledo, Ohio, Jeep is one of Detroit’s great stories of resilience and change at a time when the car business worldwide is going through a huge transformation.

As one of the most famous vehicles born during World War II, Jeep gradually has grown over the years into a one of the industry’s best-known nameplates. Today it has an intensely loyal fan base both in North America and now in other corners of world even as it also spawned all kinds of imitators.

Having finally emerged as a true global powerhouse, Jeep has been extending its model lines with the addition of vehicles such as Jeep Cherokee, which was given a thorough mid-cycle overhaul for 2019 model year.

The updated version of the, which sits squarely in the middle of the Jeep’s growing model range, comes with an impressive list of available features, a new exterior appearance and an impressively sophisticated optional 2.0-liter turbo-charged engine with direct injection that delivers both power and efficiency.

In addition, the 2019 Jeep Cherokee also comes with a re-tuned suspension that improves the vehicle’s ride and handling even on difficult roads and in delivers a comfortable feel for everyday driving. 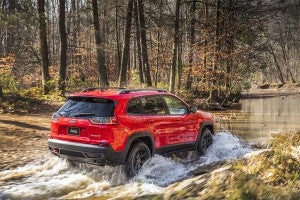 With the 2019 Jeep Cherokee, Fiat Chrysler Automobiles N.V. also has remained faithful to the promise of making every Jeep capable of tackling the most challenging of off-the-road dirt tracks through rugged terrain.

(Jeep Cherokee gets conventional look for 2019. Click Here for the story.)

The owners who actually take the utility vehicles off the pavement are relatively small. Let’s face it asphalt has cars, truck and utility vehicles practical. But the ability of the latest version of the Jeep Cherokee is the singular feature that has helped the Cherokee triple its market share in its particular segment against some very impressive competition from vehicles such as the Ford Escape, the Toyota RAV4, which now Toyota’s best-selling vehicle and the Honda CRV.

In the rugged hills of Southern California, however, the 2-liter version of the 2019 Jeep Cherokee moves over the terrain without missing a beat as its scales rocks, sandy trails and traverses steep inclines and nose-down drops.

The off-road capability can be enhanced by the four-wheel-drive systems available on Cherokee and a Jeep Active Drive system with a two-speed power take off unit and a Jeep Selec-Terrain traction control system with five different models of operation in mud, snow, sand, rock or auto.

At the same time, I found that the Cherokee, which weighs about 150 pounds less than the earlier versions, was most road worthy. The Cherokee had a nice taut feel on the road with little pitch or roll on twisty mountain roads up behind the Malibu’s beaches on the Southern California. The steering was also sharp and easy to use on the mountain roads and the brakes solid and responsive under all kinds of conditions. 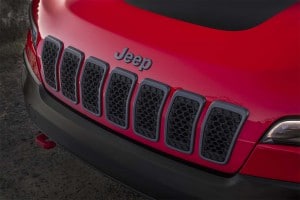 For 2019, the Jeep Cherokee adopts a more conventional lighting system.

Not only has the suspension been retuned, but FCA also is making a new 2.0-liter turbo-charged engine with direct injection available in 2019 Jeep Cherokee for the first time FCA is also making the same engine available in the Jeep Wrangler.

In the Jeep Cherokee the 2.0-liter turbo, when matched up with the nine-speed automatic transmission, produces 270 horsepower and 295 foot-pounds of torque for quick starts and off-road driving. Both of Cherokee that I drove had four-wheel-drive.

However, the 2019 Cherokee also comes with 4×2 version very drivers who live in milder climates and don’t really expect to go off road.

(Click Here for our review of the all-new Jeep Wrangler.)

FCA also has done an extensive makeover the Cherokee’s exterior design by standing up the seven-slotted grille inside a front fascia that includes new LED headlights and fog lamps. The headlights aren’t round, but the overall design of the front look does have a more traditional look.

There is also a new tail gate that is lighter and also can has a hands-free feature activated by placing your foot in under a sensor in the rear bumper. There also no fewer than five new wheel designs. 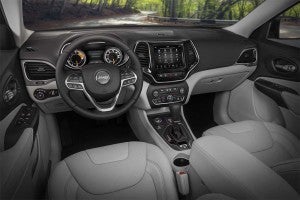 The Cherokee gets a more modest interior upgrade for 2019.

The interior of new Cherokee also has to make it more refined with new chrome and piano black accents. There is also plenty of storage space and cup holders and overall FCA’s engineers have managed to widen the Cherokee’s track or width by about one-half inch. The noise vibration and harshness felt in the interior is minimal four a vehicle that was designed to travel off the pavement.

The cargo space at the rear of the vehicle, a vital part of any utility vehicle, also has been re-organized for easier access.

The Jeep Cherokee also is available with an array of automatic driving assistance feature, starting with blind spot monitoring and including a forward-collision warning system plus, which under certain circumstances can apply the vehicle’s brakes.

The Cherokee also comes with FCA’s fourth generation U-Connect system for connecting to the Internet and mobile phone service hands free as well as entertainment and navigations features through a 7- or 8.4-inch touch screens. Apple Car Play and Android Auto also are available on the Cherokee.

FCA is offering the 2019 Jeep Cherokee in five different trim levels beginning with the Latitude 4×2 version, which starts at $23,995 before the application of $1,195 destination charge.

I found the 2019 Jeep Cherokee with the 2.0-liter turbo-charged engine quite capable off road but also powerful and civilized to drive in normal, everyday traffic. This is a vehicle that can do all sorts of things quite well at a reasonable price.