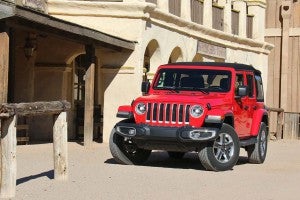 The Wrangler is back — again! The 2018 Wrangler Sahara is part of a portfolio considered the most capable Jeeps ever.

Few vehicles can match the storied history of the Jeep Wrangler, born nearly 80 years during a competition to build a light-weight military vehicle.

The Willys Corp., one of the many, many ancestors of Fiat Chrysler Automobiles, won the design competition and the rest, as the saying goes, is history. The forerunner of the Jeep Wrangler has carried scouts, wounded soldiers and weapons during combat around the world and during the years has also evolved into a favorite of outdoorsman, hunters and fisherman who prized its ability to traverse all sorts of terrain.

The 2018 Jeep Wrangler continues the long tradition of being able to travel over all sorts of ground. But it adds a measure of civility and safety that is sure to capture the attention of less adventurous buyers with its ride and handling and new technology.

Driving the older versions of the Wrangler on pavement could be something of chore since its relatively short wheelbase served to underscore the vehicle’s imperfections. In the new version which has been completely re-engineered to meet tougher safety and fuel-economy standards, the Wrangler is still designed to travel over rugged country on washboard, desert roads or climbing over rock piles that even its ancestors would have had serious difficulty scaling without damaging some major components. 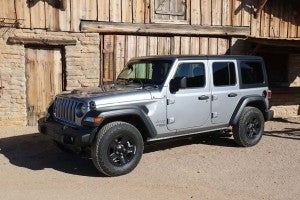 The new Wrangler is a body-on-frame vehicle but the weight of the frame has been offset by high-strength aluminum doors, hinges, hood, fenders and a magnesium swing, which reduces the vehicle’s overall weight and boosts fuel economy.

(All new, yet surprisingly family, Jeep formally introduces 2018 Wrangler. To check it out, Click Here.)

In another departure from tradition, the Wrangler comes electro-hydraulic power steering as standard equipment, altering the vehicle’s steering feel to ensure its lighter and easier to maneuver out on the highway, into a parking place or even traveling off road and on to a desert road out among the cactus in southern Arizona.

As in the past, the 4×4 version of the Jeep 2018 Wrangler is equipped with solid front and rear axles, locking differentials and a disconnecting front sway bar continue to maintain and even enhance its off-road capability. 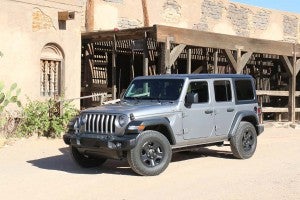 The new Sahara features the legendary seven-slot grille updated to show the outer grille slats intersecting with the headlights, like the CJ.

The Wrangler’s capability can be enhanced by heavy-duty axles, transfer cases and skid plates for anyone contemplating serious off-road travel. The capability was demonstrated to my satisfaction during a test-drive over a rock outcropping. The off-road test was described as one of the toughest ever devised for a Jeep vehicle.

The Wrangler, which is equipped with what is described as the industry’s leading approach angle of 44 degrees, break over angle of 27.8 degrees and a departure angle of 37 degrees, made it with ease.

Standard electronic stability control, trailer-sway control, electronic roll mitigation, brake traction control and Hill-start Assist all bolster the new Wrangler’s stability even when its nose is pointed straight up into the air.

However, Wranglers have built up a reputation throughout the years of being able to travel over rock formations, wade across streams and drive on rugged trails and the vehicle has legions of loyal fans, who can attest to virtues when they take it off road. Despite the new seats and interior amenities, Wrangler loyalists won’t be disappointed by the 2018 Wrangler.

The new Rubicon two-door reveals the rugged capability of the newest generation Wrangler.

The real change comes in the Wrangler’s on-road driving characteristics, which are vastly improved thanks to a new five-link suspension that is capable of managing pavement. Earlier versions of Wrangler were exhausting to drive, noisy, never seemed to steer accurately and had what could be described as indifferent brakes.

The new Wrangler is completely different to drive on pavement. The ride and handling is way, way better and noise, vibration and harshness is greatly improved. Drivers and passengers don’t feel as if they are riding in a tin can.

In addition, the interior has been modernized to include 3.5- or an optional 7-inch thin-film transistor information LED display. The 7-inch LED display allows the driver to configure information in more than 100 ways including current media being played, tire pressure or digital speed readout. Integrated buttons on the steering wheel control audio, voice and speed functions.

With the removable doors, the Rubicon gives the driver a better view of whatever they are crawling over.

A fourth-generation Uconnect system enhances the user interface and system performance with quicker start up times and improved screen resolution. Directly below the touch screen are functional features such as climate and volume control knobs and media connectivity ports.

Two USB ports up front and two in reach of occupants in the back seat connect to the media center. Standard 12-volt accessory outlets are located throughout the all-new Wrangler and a 115-volt AC outlet is available to power select three-pronged home electronics.

The retuned 3.6-liter Pentastar engine with the stop-start system that I drove delivers 285 horsepower and 260 lb.-ft. of torque, which is helpfully distributed to the low end of the torque curve to improve the vehicle’s performance off road or pulling away from a stop light.

The 2018 Wrangler will be available in both two-door and four-door versions and I frankly think the four-door version has better proportions and no longer looks as if it was merely a tacked on extension of the original two-door design.

Jeep designers retained key elements from the Jeep’s past including the instantly recognizable seven-slotted grille and round headlamps and square tail lamps recall the Wrangler’s rugged and distinguished heritage.

A key element of the Wrangler’s popularity is the fact individual owners can reshape the vehicle in multiple configurations. For example, there is a fold-down windshield for off-road purists, an easy-to-use one-touch power top, two hardtops and premium soft top. 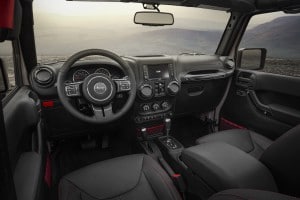 Jeep undated the interior of the latest generation of the Wrangler giving the driver plenty of flexibility while remaining simple.

Prices for a two-door Wrangler will start at $26,995 and before the addition of the $1,095 transportation charge but the price ladder will run all the way up to $40,495 plus the destination charge.

My guess is that because of the improvements in the overall exterior appearance and drivability of the Wrangler, Jeep is opening up a whole new audience for a vehicle that up until now belonged rather exclusively to a devoted sect of owners and buyers, who always seemed to have at least one foot outdoors no matter where they parked.