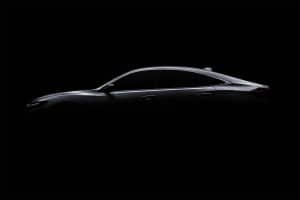 Honda is hoping the third time will be the charm with the Insight hybrid, which will debut in Detroit next month.

If at first you don’t succeed, try, try again. That’s clearly a mantra for Honda as it gets ready to reveal a prototype version of its 2019 Insight model at next month’s North American International Auto Show. Then again, the Japanese automaker might be looking at another adage: the third time’s a charm.

For now, Honda isn’t saying much beyond promising it will take a “new approach” with the third-generation hybrid-electric vehicle, among other things opting for a conventional, albeit sleek and sexy design. It will also get a new, two-motor gas-electric drivetrain.

“You won’t have to be an electrification advocate to appreciate the new Insight – it’s a great car in its own right, independent of what’s happening under the hood,” said Henio Arcangeli, Jr., sales chief and general manager of the Honda Division in the U.S. “The all-new Insight embodies Honda’s approach to creating electrified vehicles without the typical tradeoffs.”

The original, 1999 Honda Insight was the first HEV to reach U.S. shores – followed soon after by the first-generation Toyota Prius. It was, in Honda’s words, a “technological tour de force,” pairing a single-motor hybrid drivetrain with an extremely lightweight aluminum body and the latest in aerodynamic designs. The first Insight delivered great fuel economy numbers: an EPA-rated 70 mpg. But its sales numbers were another matter entirely, and the two-seater was pulled from the market in 2006. 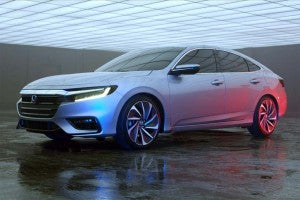 A prototype of the new 2019 Honda Insight reveals a more conventional looking vehicle than past versions.

(Honda Clarity named Green Car of the Year. Click Here for the story.)

Honda came back with a larger Insight in 2009, billing it as the most affordable hybrid model on the market. This time, it could seat five and offered substantially more space and utility. But it retained the sort of sci-fi styling meant to let it stand out in a crowded parking lot. The gen-two Insight was faulted for its weak performance – and for fuel economy that came to just 41 mpg in the City and 44 on the EPA Highway test.

It also failed to generate much in the way of sales and was pulled from production in 2014.

The teaser image of the third-generation Insight suggests that Honda is following the latest trend, choosing to go with a more mainstream design – albeit one that adopts a sleek, coupe-like roofline along the lines of the Audi A7. While specific details won’t be released until the upcoming Detroit Auto Show, it appears the production, 2019 Honda Insight will be the roomiest version yet, and just slightly smaller than the latest-generation Honda Accord. 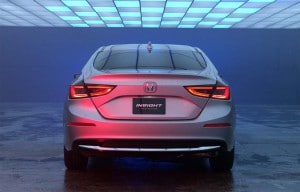 The Insight prototype will likely get some minor tweaks before it shows up as a production model.

It should also offer significantly better performance than the two anemic models that came before it. Credit the switch to Honda’s latest two-motor hybrid system. In the Accord, that gas-electric package makes about 212 horsepower – compared to a mere 98 for the last-gen Insight – and delivers 49 mpg City, 47 Highway.

(Click Here to see which Honda is a finalist for North American Car of the Year.)

What might we expect from the production version of the next Honda Insight? The automaker suggests it will be “competitive with other compact hybrid models.” If that’s a shot across the bow of the current Toyota Prius that would suggest something on the order of 53 to 56 mpg City, depending upon the model. The Camry Hybrid comes in at 42 City. Then there’s the Hyundai Ioniq at 58 mpg, while the Kia Niro manages 52.

The arrival of a more conventional looking Insight probably shouldn’t come as a surprise. It’s essentially the successor to the hybrid version Honda abandoned with the latest-generation Civic line. 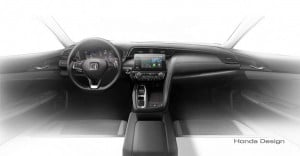 In typical fashion, the Japanese automaker is going to reveal a very thinly disguised version of the production 2019 Insight at the Detroit Auto Show. We’d be surprised if the final model won’t find its way onto the Honda stand at the New York Auto Show come April. And it’ll start rolling into showrooms by mid-year.

The 2019 Honda Insight will join two other hybrid models in the maker’s line-up, alongside the Accord Hybrid and the plug-in version of the new Clarity – which is also going to be offered in fuel-cell and pure battery-electric configurations.

(To see TDB’s first drive in the new Honda Accord, Click Here.)

Honda has set a goal of having “electrified” models account for a full two-thirds of its global sales by 2030.