Chevy focuses on new steel alloys, rather than aluminum, with new truck. 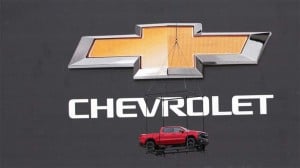 Chevy is looking to lower the boom on its competition with a redesigned 2019 Silverado.

If there was a state car of Texas it would almost certainly be the pickup truck, a good reason why Chevrolet headed down to Dallas to give the world a first look at the 2019 Silverado.

Chevy is hoping the next-generation pickup will help it close in on the full-size segment’s sales leader, the Ford F-Series. Like its rival, the new Silverado boasts a new stylish exterior and plenty of new safety and infotainment technologies. But in sharp contrast to Ford’s shift to lightweight aluminum, Chevy says it’s sticking with steel.

The 2019 Chevrolet Silverado will turn to “a higher-grade alloy (for) the roll-formed, high-strength-steel bed floor, contributing to a bed that is more functional and lighter weight,” General Motors’ largest division explained.

The U.S. new vehicle market is in the midst of a massive transition, motorists by the millions trading in their sedans and coupes for light trucks. The big push is for sport and crossover utility vehicles, but pickups have also been gaining ground, especially as manufacturers like Chevy and Ford add more car-like amenities. 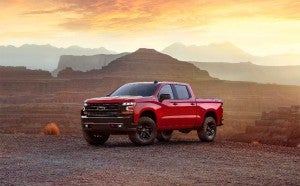 With the 2019 Chevy Silverado, GM is hoping to wrestle away the title of "top selling vehicle in the U.S." from Ford and its F-Series trucks.

The GM division is saving some details for the Silverado’s official public debut at the North American International Auto Show next month, but it is expected to feature the latest version of Chevrolet’s infotainment system, including the new GM Marketplace, which will allow a motorist to do things like placing an order for a Starbuck’s coffee or even make hotel reservations from inside the car.

(Chevy’s got a hit with its Centennial Truck line-up. Click Here for the story.)

For now, Chevy is focusing on the issues that matter most to serious truck users: strength, durability and hauling and towing capabilities.

Rival Ford shook things up when it switched to an “aluminum-intensive” body for the latest generation F-150, a move that reduced the mass of some versions of the pickup by as much as 700 pounds – in the process delivering better mileage and improved payload numbers. 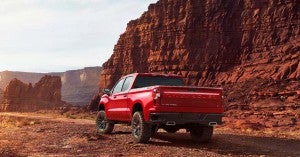 The new Silverado gets a complete exterior redesign that is edgier than its predecessor.

Chevy has been fighting back in a series of ads that question the durability of the Ford truck. And while there had been some speculation the GM brand would also add more aluminum to the 2019 Silverado, its strategy focuses on new steel alloys that deliver greater strength even though they are lighter. How much mass the Silverado has shed likely won’t be revealed until the Detroit Auto Show next month, however.

Though Chevy notably excluded any mention of aluminum in its comments about the new Silverado the 2019 pickup is likely to add some of the lightweight metal in areas less likely to face extreme punishment, such as the hood, as well as in the suspension.

(Click Here for about Chevy’s plans to exploit the surge in light truck sales.) 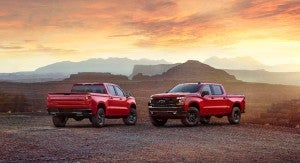 Chevy's new full-size pickup continues to use steel in its bed and question the durability of Ford trucks.

The current Silverado already has a solid reputation for durability and reliability, but the truck has often been faulted for its conservative design. That’s something Chevy has tried to address with the 2019 Silverado, adopting a bolder, more distinctive look, starting with a bold new grille accented by a black double crossbar and framed with more slit-like, high-mount headlamps. The sides feature a series of creases and curves, with a strong accent line running from front to rear wheel wells. The Z71 model shown in Texas features a black rear bumper and twin chromed tailpipes.

The new Silverado will share the stage at the upcoming NAIAS with an all-new version of the Ram 1500 pickup, as well as another version of the Ford F-150.

“2019 is going to be the year of the pickup battle,” Autotrader senior analyst Michelle Krebs said. “These trucks are incredibly important. Selling them now will pay for investments in future technologies like autonomous and electric vehicles.” 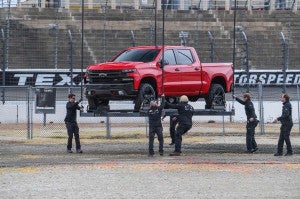 Chevrolet unveiled the new Silverado in Texas, which is considered by my many to be the spiritual home for pickups.

While pickups traditionally appeal to commercial users, they’ve also gained a large audience among regular customers who simply like the size, the high-seating position, the flexibility and, in particular, the towing capability they offer.

“Many of our owners depend on their trucks for work and play, personalize their trucks in astonishing ways and pass their loyalty for Chevy Trucks down from generation to generation,” said Alan Batey, president of GM North America and head of global Chevrolet.