Want a Black Friday Deal? Go to a Dealership, Not a Mall

Save thousands instead of hundreds and sleep in! 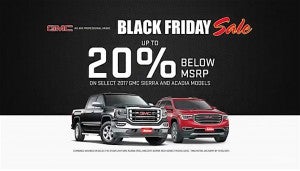 Automakers are looking to get your money into the pockets of dealers rather than retails at the mall on Black Friday.

If you’ve watched television in the last two weeks, you know that some shoppers are sleeping in on Black Friday and still saving big money — on new cars, trucks and utility vehicles.

Most shoppers are headed to malls across America the day after Thanksgiving, but automakers are providing new vehicle buyers plenty of reasons to head to the nearest dealership. In fact, the four-day Thanksgiving weekend is a holiday makers target.

“Black Friday is certainly a great time to go car shopping,” Jennifer Newman, editor-in-chief of Cars.com, said in a statement.

“We’re seeing solid incentives from a number of different manufacturers. If you are already in the market for a new car, you might want to consider hitting your local dealership lots this Black Friday instead of waiting in long lines at your nearest big-box store. From the data we’ve seen, the reward is there for certain vehicles.”

(As SUV sales boom Chevy planners have “our eyes on a lot of things.” Click Here for details.)

Sales are running nearly 2% behind last year’s totals, which has some automakers itching to make deals. Additionally, dealers may be stuck with higher volumes of 2017 models sitting their lots as the 2018 vehicles are rolling in, giving them a good reason to make more deals.

“The outgoing models are increasingly undesirable to dealers,” said Karl Brauer, executive publisher for Kelley Blue Book and Autotrader. “They are going to do whatever it takes to move them.”

Part of the reason for the 2017 models lingering is the ongoing shift from cars to SUVs and crossovers. Car sales are down 9.2% this month, according to Autodata, while utes are up 3.6%. This means your best deals can be made on cars.

(Click Here for more about flat auto sales in October.)

Buyers on Black Friday typically get a better deal than the days preceding it, Eric Lyman, chief analyst for TrueCar, told USA Today, adding they shouldn’t feel pressured to buy a car that isn’t right for them based on a large discount.

“With deals aplenty, shoppers have good reason to go car shopping. However, our research indicated that regardless of deals and incentives, 16% of shoppers are more inclined to visit a dealership this Black Friday because they have more available free time, and 8% said they’d shop over Black Friday simply because ‘it’s fun’,” added Newman.