Gas prices surge as refineries close; up to 500,000 vehicles destroyed. 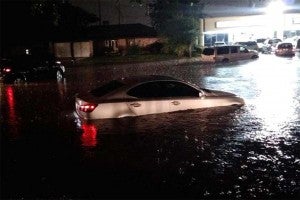 Experts believe Harvey will have destroyed twice as many vehicles as Superstorm Sandy.

After turning back out to sea and regaining strength, what’s left of Hurricane Harvey slammed back into the Gulf Coast early Wednesday, promising to further the devastation it has also wreaked on large portions of coastal Texas.

What is now a tropical storm ran ashore near the Louisiana-Texas border, an area where a major share of U.S. petroleum refineries operate. The country’s largest, the Motiva facility in Port Arthur, Texas, began shutting down “in response to increasing local flood conditions,” the refinery announced. It isn’t expected to reopen until flood waters recede – which could take time considering “the whole city is underwater right now,” Port Arthur Mayor Derrick Freeman said in an overnight post on Facebook.

The second coming of Harvey is likely to mean further devastation from an automotive standpoint. Already, authorities estimate that as many as 500,000 vehicles have been destroyed by the storm, some by wind damage but most due to flooding. That is expected to start driving up used car prices across the country though it could also help boost demand for new vehicles at a time when the U.S. new car market had been falling into a slump.

It will be weeks, perhaps months, before the damage from Hurricane Harvey can be fully calculated, but from an automotive standpoint, it appears to have had a substantially bigger impact compared to two other major storms. According to Louisiana State Police, about 200,000 cars were destroyed by Hurricane Katrina. Superstorm Sandy, which struck the densely populated New York region, caused the destruction of about 250,000 vehicles, said Jonathan Smoke, chief economist for Cox Automotive, which operates a network of used car auctions across the country.

On top of that, “We think 20,000 to 40,000 new vehicle sales could be delayed in Texas,” said Smoke, noting that this is likely to reduce the overall U.S. new vehicle sales total for August – which was expected to finally see a modest upturn after six consecutive months of decline. On the plus side, he said, “September will likely get a mild boost from delayed purchases.” 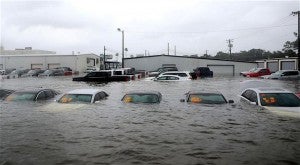 Texas dealerships are being devastated by Hurricane Harvey and automakers are rallying to help.

In fact, there’s likely to be a big bubble in demand in the Gulf region once the flood waters recede as motorists and businesses are forced to replace vehicles destroyed by the storm. There are about 5.6 million vehicles registered in the Houston Designated Market Area, and the DMA normally accounts for about 2.3% of total U.S. vehicle sales.

Whether that is good or bad news depends on who you ask. For used car buyers, Smoke said, that’s likely to result in at least a temporary bubble in pricing for previously owned vehicles. For automotive manufacturers, strong demand in Texas and other parts of the Gulf could nudge up demand for new vehicles and offset this year’s slump. Sales of pickups and other vehicles used for construction could prove especially strong as clean-up and recovery work gets underway.

For U.S. motorists, the impact is already being felt across the country. The Gulf Coast is home to about a third of the nation’s refinery capacity, and a chunk of that is already off line. The Motiva facility in Port Arthur joins the Exxon Mobil Baytown complex west of Houston, among other major refineries shuttered by the storm. Even before Motiva shut down, about 3.6 million barrels per day of refining capacity had been taken offline. And with refineries in the rest of the country already operating at well above 90% of their capacity, experts warn it will be hard to make up the Gulf losses.

(Click Here for details on how to avoid buying a flood-damaged car.) 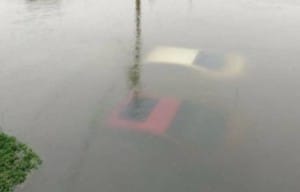 Automakers are offering payment relief to customers in Texas in the wake of Hurricane Harvey.

“Basically this will affect everyone across the country on some level and your proximity to the supply chain will affect how severe the impact is to you,” Jeff Lenard, vice president of strategic industry initiatives for the National Association of Convenience Stores, told the Reuters news service. NACS members distribute about 80% of all gasoline sold in the U.S.

Even before Harvey made its second landfall, gasoline futures were trading 4% higher. Complicating matters, demand for gas was already expected to spike for the long Labor Day holiday. Gas supplies are reportedly already running out at some stations in Central Texas, according to tracking firm GasBuddy.com, and it is asking users of its smartphone app to help identify stations that are still able to pump fuel.

Nationwide, gas prices shot up to an average of more than $2.37 a gallon of regular unleaded by the time Harvey first slammed into Texas, according to AAA, a 4-cent jump. Some experts are forecasting prices could rise another dime or more in the near-term, and GasBuddy’s “Live Ticking Average” found the nationwide average had jumped again to $2.42 by Wednesday morning.

“Despite the country’s overall oil and gasoline inventories being at or above 5-year highs, until there is clear picture of damage and an idea when refineries can return to full operational status, gas prices will continue to increase,” said Jeanette Casselano, a AAA spokesperson.