Fields Tried to Fire Hinrichs Before He Was Booted From Ford 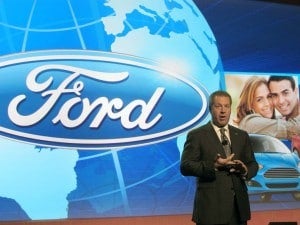 In a final bid to satisfy Ford shareholders – and Chairman Bill Ford – CEO Mark Fields tried to shift blame for the company’s weakening performance stock price to his top lieutenant, according to a new report. But the effort to fire Ford’s President of the Americas Joe Hinrichs was blocked and Fields himself was given his walking papers on May 19th.

In turn, the popular Hinrichs wound up with a significant promotion as part of the shake-up that saw Fields replaced by former Steelcase chief executive Jim Hackett, notes a report in Automotive News. The 50-year-old Hinrichs will now serve in the newly created post of president of global operations.

Last month’s shake-up at Ford came as the automaker scrambled to address declining U.S. sales and market share, a 38% plunge in first-quarter earnings, and a stock price that had dipped 40% since Fields was named CEO in July 2014. It hit a new 52-week low around the time Fields agreed to officially “retire” under pressure from the Ford board of directors and Bill Ford himself.

(Fields out as Ford shakes up entire top management team. Click Here for the full story.)

In explaining the reasons behind the management changes, one of the concerns cited by both the chairman and new CEOA Hackett was a worrisome shift in Ford’s corporate culture. For decades, the company was known for the knife-in-the-back approach of top management that often saw senior executives focus more on building their own turf than building the company. It was one of the key issues former CEO Alan Mulally set out to address before his own retirement three years ago. 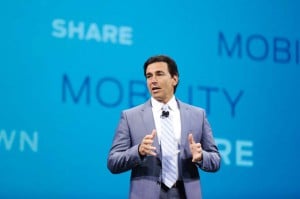 Former CEO Mark Fields hoped to keep his hands on the reins by ousting his top lieutenant.

While Fields was Mulally’s hand-picked successor, some critics felt there was a return to turf wars under his reign. It can be difficult to tell, several observers privately have told TheDetroitBureau.com, whether some of the top managers who have left Ford were pushed out to make room for better talent or simply because they fell victim to corporate intrigue.

The Ford board and its chairman clearly felt such concerns when, earlier in May, Fields said he wanted to get rid of Hinrichs. The head of operations in North, Central and South America had already taken a costly slap, his name missing from the list of executives who were to receive a retention bonus presented to the U.S. Securities and Exchange Commission.

Now, Fields was proposing Hinrichs be pushed out entirely, taking the blame for a 5.1% decline in U.S. car sales during the first four months of 2017 – roughly double the overall market decline. Market share, meanwhile, had fallen four-tenths of a point in an industry where manufacturers will invest millions just to pick up a single tenth.

The reasons for the decline are complex. Ford has an aging passenger car fleet at a time when overall demand for sedans and coupes, such as the Fusion, Focus, Fiesta and Mustang, have been sliding. It has some strong truck nameplates, like Escape and F-150, but arguably still has a few holes in the line-up. It won’t have a midsize pickup for more than another year, for example. Blame for products lapses can be apportioned out among a variety of individuals, as well as the Ford board.

Another factor for declining sales: Ford’s conscious decision to trim back on fleet sales. Though not as aggressive as the moves made by cross-town rival General Motors, the second-largest U.S. automaker has been curbing shipments, especially to low-profit daily rental companies. 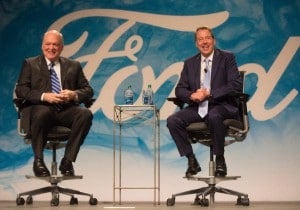 Losing volume in North America is a big problem, even for a company as globalized as Ford, Since Hinrichs replaced Fields as President of the Americas in 2012, the region generated $38 billion in pre-tax earnings, or 92% of Ford’s global total, helping prop up struggling Europe while also paying for a costly expansion in China.

Hinrichs clearly sat in one of the hot seats as Ford’s stock continued to fall as winter turned to spring and all the company’s key metrics continued to head south.

But Fields’ attempt to get the board to oust his lieutenant never gained traction. By the week of May 14th, the report points out, the board had already decided it was the CEO who needed to go. That Friday, he met with Chairman Ford and given the news that it was time to retire, the company also giving that option to long-time head of media relations Ray Day.

(Ousted Ford CEO Fields to get a lavish parting pay-out. Click Here for the story.)

The news was revealed three days later, on May 22nd, with Bill Ford and Hackett holding a news conference at the company’s suburban Detroit headquarters. Hinrichs would not only get the new, global post but also a $5 million stock bonus.

That doesn’t mean he – or Hackett or any of the other new senior executives – is off the hook. Ford’s stock price has been riding a trampoline since the shake-up was announced, and is currently running just slightly ahead of where it had bottomed out last month. Ford’s sales are, like the rest of the industry, expected to be weak for May, with June a big question mark. Second-quarter profits are also forecast to be off from year-earlier levels.

Ford will have to prove that the ouster of CEO Fields wasn’t just another case of shuffling the deck chairs to win back support from investors. And it will have to make some smart product and marketing moves to show that it can hold its own at a time when the U.S. market is expected to contract after three record years in a row.