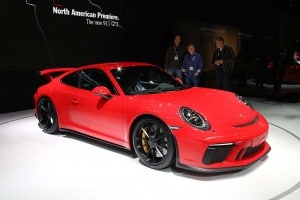 Porsche plans to offer 20 variations of its vehicles to keep sales strong in the highly competitive U.S. market in the next few months.

The U.S. is the most important performance market in the world and Porsche plans over the next few months to offer more than 20 new variations of its vehicles to its American and Canadian customers to ensure it stays on top, according to Klaus Zellmer, Porsche USA CEO.

“Demand for performance cars in the U.S. has never been stronger,” Zellmer said during the company’s press conference at the New York International Auto Show.

He also noted that the German sport car maker also offers more choices than its competitors. “Our line-up has never been better balanced between two and four door models,” added Zellmer.

He believes the new models will help Porsche continue to expand sales in North America, which have been just fine thus far. In March, Porsche sales increased by 3.6% and for the first-quarter are up 3.9% over last year when sales were also strong.

During the press conference, Zellmer targeted four vehicles, the Porsche GT3, Panamera Sport Turismo, Panamera Turbo SE Hybrid and the 911 GTS, which were making their first appearance at an auto show in the U.S. after being introduced last month in Geneva. 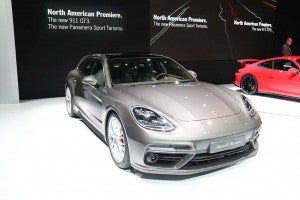 The Panamera Sport Turismo features a unique design with seating for five as well as a larger tailgate and luggage compartment, combining the performance and luxury for which the Panamera already is known with a higher level of practicality.

In the new, motorsport-derived 911 GT3, the central focus is the newly developed, high-revving naturally aspirated flat-six engine making 500 horsepower that revs to 9,000 rpm. Zellmer also stressed a manual transmission is available in the 911 GT3.

(Click Here for the story about the world’s fastest production car.)

“Yes the manual is back,” he said. The optional six-speed manual transmission will be offered as a no-cost alternative to the seven-speed PDK dual clutch transmission.

The new Panamera Turbo SE Hybrid is the most powerful Panamera ever. The debut of the new 680-hp hybrid marks the first time Porsche has positioned a plug-in hybrid as the highest performing variant of a standard model line.

The new 911 GTS is the highest performing 911 Carrera and Targa variant, which also creates a strong value proposition through a higher level of standard equipment and several performance-enhancing features.

Beginning with model year 2018, Porsche will include the first scheduled maintenance service, at 10,000 miles or one year, as standard on all vehicles.