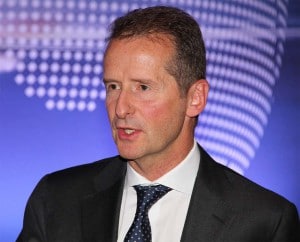 VW boss Herbert Diess is clashing with the automaker's unions over its turnaround plan.

Volkswagen AG is facing new challenges as discussions with its employees union in Germany have been put on hold after company and union negotiators failed to reach agreement on the implementation of the company’s proposed turnaround plan.

The talks are tentatively scheduled to resume later this month but the failure to reach agreement with the unions at its major plants in Germany could have dire consequences for the company as its struggles to overcome the huge and still rising financial burden created by the two-year-old diesel emission scandal.

Volkswagen’s talks with unions over the implementation of its turnaround plan broke off on Monday, both sides said, leaving in limbo a deal on cost-cutting following the carmaker’s damaging diesel emissions scandal.

Union’s at Volkswagen halted cooperation with management on issues including overtime work, efficiency gains and apprenticeships last week, saying executives were trying to squeeze greater savings than agreed in November.

Tensions flared again this week when VW’s works council indicated that issues between its head Bernd Osterloh and VW brand chief Herbert Diess, who have clashed over how to achieve greater savings, had not eased and called for VW Group Chief Executive Matthias Mueller to play a greater role in resolving the dispute, according to news reports from Germany.

Staff representatives “are clearly committed to the contents and core values of the future pact,” a works council spokesman said in an email to Reuters. “They are also expecting this from management.”

Diess pledged to make proposals for solving the controversial issues by next Monday when both sides will resume the talks, the works council spokesman said.

Unions say Diess, who established a reputation for cutting costs at BMW, wants to cut temporary workers more quickly and deeply than agreed.

VW has said it cannot keep a large number of temporary staff on its books the way it used to because of shrinking demand for core models such as the Golf hatchback and Passat saloon which accounted for almost a third of the brand’s 5.9 million models built worldwide in 2015.

“We would welcome if the group’s management would more strongly deal with the implementation of the future pact and the compliance with agreements,” the works council spokesman said.