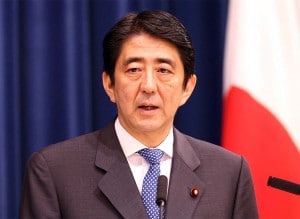 Japan Prime Minister Shinzo Abe chairs a committee reviewing a proposal that would set 2020 as the target for commercializing automated-driving technology.

The push to develop autonomous cars is increasingly taking on a global hue as activist governments around the world take a hand in making more space for self-driving vehicles.

For example, the Japanese government now aims to have self-driving vehicles provide transport to its rapidly expanding population of senior citizens and others with limited vehicle access by 2020 and is deliberately encouraging development of the self-driving technology to address growing social challenges, according to the Nikkei Asian Review.

Meanwhile, Dubai has cut a deal for autonomous vehicles with Tesla. The country’s transportation authority announced a deal to buy 200 Tesla Model S sedans and Model X SUVs for the city’s huge taxi and limousine fleet, which now number numbers more than 10,000 vehicles.

The move is part of a broader effort by city officials to make 25% of all local car trips autonomous by 2030, according to The National, a United Arab Emirates-owned newspaper. The Dubai Future Foundation, a city government initiative, started promoting the autonomous-taxi program earlier this year.

In Japan, a government council on investments for the future, chaired by Prime Minister Shinzo Abe, is reviewing a proposal that would set 2020 as the target for commercializing automated-driving technology as part of a push to improve access to transportation and boost efficiency in the logistics sector.

(Autonomous drones coming to Dubai. Click Here for the story.)

Dubai recently signed a deal to buy 200 Tesla Model S and Model X vehicles for use in their autonomous taxi fleet.

Later this year, driverless cars and buses will be brought to more than 10 areas across Japan – near highway rest stations – to take the elderly and other residents to stores and hospitals. The current plan would have the trials supervised remotely.

The shutdown of public transportation in a number of depopulated areas, coupled with the reluctance of many seniors to drive on their own, has left an estimated 7 million Japanese residents with limited transportation access, according to the Nikkei Asian Review.

In addition, the Shin-Tomei Expressway, which runs part of the way between Tokyo and Nagoya, will be equipped to allow largely autonomous truck convoys. Several driverless vehicles follow a human-driven truck to which they are wirelessly linked.

(Click Here for details about GM, Lyft deploying “thousands” of autonomous Bolts in 2018.)

This could include creating dedicated lanes in certain areas. The technology will be tested with drivers present in all vehicles starting next January, and with only a lead driver beginning a year later.

The council will also release plans for a legal framework to help put self-driving vehicles on the road. Steps including revisions to the Road Traffic Act are thought to be necessary. Safety measures – such as protocols for what to do if trucks in a convoy lose their connection to the lead vehicle – and licensing procedures are to be discussed with entities including the National Police Agency and the infrastructure ministry.

In the U.S., the State of Michigan in December passed a law allowing autonomous vehicles to be tested on public roadways. Several other states have similar in place or are considering such legislation. Additionally, Japan aims to encourage similar experimentation.

(Autonomous vehicles will grow into a $560 billion industry. Click Here to find out when.)

Efforts are underway to alter United Nations policies requiring that a driver be able to take physical control of a vehicle in an emergency. Some critics see the rule as out of step with developments in automated-driving.