"I had to build in those idiosyncracies." 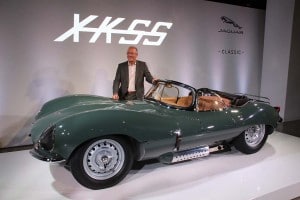 The fire moved quickly, and with devastating results, leaving little more than ashes and molten metal where Jaguar’s Brown’s Lane factory once stood.

The disaster that struck on February 12, 1957 nearly destroyed the British maker and ruined its plans to build 25 XKSS roadsters, basically a road-going version of the D-Type race car that had dominated Le Mans for much of the mid-decade. Only 16 had been completed, the remaining nine still in various stages of production.

But nearly 60 years later, the remaining cars will finally be completed, thanks to the British marque’s Jaguar Classic division. It’s not the first time an automaker has tried to revive one of its historic models. There are a number of recreations and plenty of “restomods.” What Jaguar has come up with is an amazingly precise continuation, accurate down to the five different type of rivets used on the original 16 roadsters.

(Jaguar electrifies with I-Pace Concept. Click Here to check it out.)

It might have been easy to make something that looked a lot like the original. But the team headed by Jaguar Classic’s Kevin Riches wanted to go the extra step. Tracking down four of the originals, the team used laser scanning to create precise computer renderings. 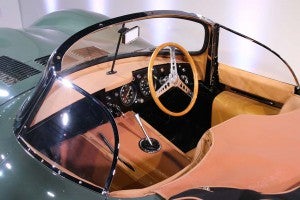 Even the wooden steering wheel matches the origianl, as does the grain of the leather seats.

“One thing we noticed very quickly: these cars were not symmetrical. They’re all quite unique,” Riches said over dinner in Los Angeles where the first of the new-is-old XKSS roadsters were revealed last week. That led to a critical decision. “If I wanted to build a real SS,” Riches said, “I had to build in those idiosyncrasies.”

Further complicating matters, each car was slightly different. Where one of the original roadsters had 14 rivets another had 16. The Classic team had to settle on which it felt was most accurate according to the original factory documents that survived the fire.

The team worked with suppliers to not only get the right parts but to ensure the use of the right alloys, the right tube shapes and thicknesses, according to Riches, a process assisted by metal supplier Reynolds that had helped produce the original XKSS monocoque.

The Weber carburetors were precisely duplicated, as was the wooden steering wheel, and even the leather used for the original car’s seats. Even the original nuts and bolts, never mind the gearbox components, had to be created from scratch. Sheet metal, meanwhile, was hand-rolled on the same sort of English wheels used at the Brown’s Lane plant six decades ago. 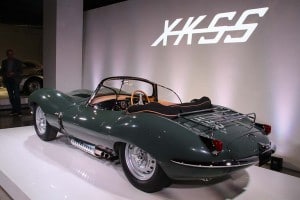 The Jaguar Classic Crew did improve the finish of the bumpers compared to the rough originals.

Only a few exceptions were made. Riches’ crew decided to use an improved casting process for the continuation series bumpers, finding the original castings just too rough. And improved machine methods mean the 3.4-liter engines on the new cars will likely burn less oil, make a wee bit more power than the 262 horsepower original — and last a lot longer.

But the gearbox will be as much a challenge to shift as the original, Riches said, beaming brightly. He’s so far one of the few to drive the first of the new XKSS roadsters – and he’ll be one of the only ones who’ll get to drive the rest as the laborious program moves forward.

The one other concession was the addition of seatbelts, something lacking on the original XKSS – which was widely known to be a favorite car of movie star and serious driver Steve McQueen.

All this effort wasn’t easy – the team has so far invested about 10,000 manhours into the project. Nor was it cheap. According to Tim Hannig, the head of the Jaguar Land Rover Classic unit, the continuation models went for “north of 1 million pounds” each.

That said, considering the price that an XKSS can command when they go up for sale – never mind the $22 million an original D-Type went for last August at the RM Sotheby’s auction at the Pebble Beach Concours d’Elegance – the asking price could be considered quite a bargain. 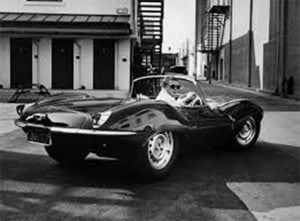 Actor and racer Steve McQueen considered the XKSS one of his favorite cars.

All nine of the reborn XKSS roadsters were sold almost immediately after the project was announced during the New York Auto Show last March. Of those, six will eventually land here in the United States.

At the debut of the first continuation car, Jaguar Classic regaled the audience with a video of Riches driving along the Southern California coast. Sadly, unless one of the new owners has the right connections, however, he will likely be the only one to have that opportunity. Despite being precise clones of the original XKSS, the new cars won’t qualify as classics in the eyes of federal law which means none of them will be street legal.

(For more on the Jaguar XKSS project, Click Here.)