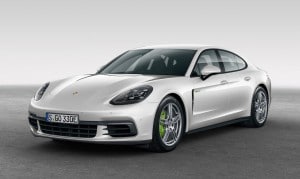 Automakers tend to debut either ground-breaking green vehicles or mind-bending sports cars in Paris: Porsche’s providing the yin and yang this time with the debut of the 2018 Panamera 4 E-Hybrid and a track-ready 911 GT3.

The Panamera was the German performance car maker’s first four-door sedan when it debuted a few years back. It was a polarizing entry with love or hate being the primary responses. Since then, Porsche’s been refining the saloon car as they say over there, and the new version of E-Hybrid is the best one yet.

The new model delivers a total of 462 horsepower and 516 pound-feet of torque using a combination of a 2.9-liter V6 gasoline engine with an output of 330 hp and a 100-kW electric motor.

Unlike its predecessor, which required its accelerator to be at 80% to engage the electric motor in what the Germans called E-Boost, the 2018 model can unleash all of the output the at any time, reportedly resulting in a 4.4-second 0 to 60 mph time and a top speed of 172 mph, which is 5 mph faster than the old model.

In addition to plenty of push-you-back-in-your-seat power, it’ll travel as far as 31 miles in electric-only mode, which is double its previous range, and hit 86 mph while doing it. Pricing is expected around the $120K mark.

(Click Here for details about the key launches at this year’s Paris Motor Show.) 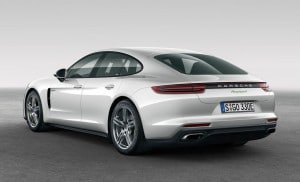 The Panamera 4 E-Hybrid travels 31 miles in electric-only mode and will do 86 mph.

That was the yin. Now, the yang: Porsche’s unleashing an updated version of its track-only version of the world’s best-selling race car, the Porsche 911 GT3 Cup, as well as and the Macan Turbo equipped with the new performance package during the show.

The new 911 is the second track-ready model the maker has unveiled recently. During the Geneva Motor Show, Porsche took the wraps off the 911 R — R as in Racing.

(Click Here for details about the Panamera shooting brake coming to Geneva.)

The lightweight, racing-inspired 2016 R is a limited-run racer: 991 units worldwide, the automaker said. It is very light with a curb weight of just 3,021 pounds, which makes it that much more fun at the track. The 911 R is powered by a 500 horsepower 4.0-liter naturally aspirated flat-six engine mated to a six-speed manual transmission.

It’ll do the zero-to-60 mph run in 3.7 seconds and reach a top track speed of 200 miles per hour. True to its purist character, Porsche says, the lightweight model is available exclusively with a six-speed manual transmission featuring short, performance-oriented gear ratios.

It’s safe to say the new model’s performance will be on par with the R.