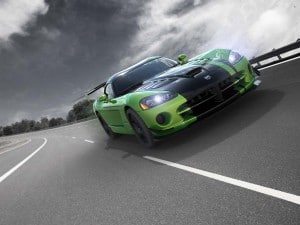 The Dodge Viper will end its run this year.

For the second time since 2010, Fiat Chrysler is killing off the Dodge Viper sports car.

Reintroduced in 2012 to much fanfare, the Viper received strong reviews, but relatively few buyers ponied up the initial MSRP of $97,395. Dodge later cut the price but sluggish sales forced it to repeatedly put production on hold.

“The Dodge Viper has had a great run and, 25 years after it was first introduced, it leaves the super car world reaching for the records it continues to set,” Tim Kuniskis, the head of the Dodge brand, said in a statement.

The Viper originally debuted in 1992 in roadster form. It was the brainchild of former Chrysler Corp. car czar Bob Lutz, design director Tom Gale and the carmaker’s engineering chief Francois Castaing. The two-seater was decidedly retro in concept, foregoing the electronic “nanny” features, like anti-lock brakes, that were just coming into widespread use. But it delivered incredible power and performance for the money, about $50,000 in that original incarnation. 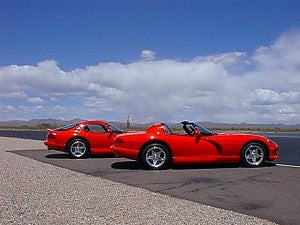 Early versions of the Dodge Viper GTS Coupe and the Viper Roadster.

The addition of a coupe model really clicked, and the Dodge Viper became a low-volume symbol of a then-resurgent Chrysler.

Over the years, the carmaker added more of those electronic features, most often to meet new federal mandates. It also kept boosting the power of the Viper’s trademark V-10 engine.

But by the time the U.S. economy began to weaken and car sales started sliding towards their worst slump in over 60 years, the Viper had hit the wall. And faced with impending bankruptcy, the new Fiat Chrysler Automobiles pulled the plug, the last of the original models rolling off the line in 2010.

At one point, new FCA CEO Sergio Marchionne announced plans to sell off the nameplate, hoping to find another major carmaker, or perhaps a specialty manufacturer, willing to take it over. When there were no takes, a small team led by Fiat Chrysler design director Ralph Gilles decided to go back and see if they could revive the nameplate.

“It was done in the darkest hour you could imagine,” said Gilles, referring to the time when the very survival of Chrysler was in doubt. The carmaker had been dumped by former partner Daimler AG, then saw a takeover by investment fund Cerberus Capital Management collapse. Only with the aid of a federal bailout and the subsequent alliance with Italy’s Fiat was Chrysler able to survive. 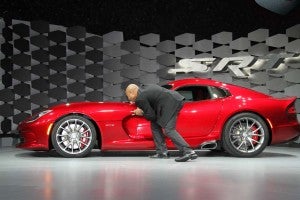 An all-new Viper managed to make it through those dark times, “like a weed,” Gilles said as he revealed the reborn sports car at the 2012 New York Auto Show.

The new Viper was always seen as a limited-edition niche product, Gilles told his media audience, but it was meant to put a halo around the Chrysler revival. “It shows we have a soul as a car company,” he declared.

(FCA may be talking autonomous cars with Uber, Amazon. Click Here for the latest.)

The initial reception was as enthusiastic as it had been initially. But this time, buyers failed to pull out their checkbooks. During the first year, U.S. sales came to a mere 641, climbing only to 760 in 2014. Only a handful of Vipers were sold outside the States.

The price tag was generally seen as one of the big problems, the 2013 Dodge Viper launching at a base $97,395. It didn’t help when an all-new version of the more popular Chevrolet Corvette made its debut in January 2013 for little more than half the price.

In 2014, Dodge tried cutting the price of the Viper by $15,000 – on top of the steep discounts dealers already were offering. It changed its model strategy and launched a new website offering buyers extensive customization options. And while the new Viper was initially marketed as an SRT — an attempt to set up a unique high-performance division – FCA soon rolled the sports car back into the Dodge brand.

Still, nothing seemed to move the needle. Last year, sales fell back to 676, and the Viper continued to lose momentum during the first five months of 2016.

Over the last several years, FCA has had to repeatedly put production on temporary hiatus and, last January, comments by CEO Marchionne didn’t appear to bode well for the Viper’s future, the executive telling reporters, “Every economic analysis that we’ve carried about keeping that vehicle in its current architectural state alive don’t add up.”

Precise plans, including timing, for the phase-out haven’t been revealed, but Dodge will offer several special editions to mark the end of the run. That includes the Viper 1:28, which celebrates the record lap time race driver Randy Probst set in October 2015 at the Mazda Laguna Seca Raceway in Monterey, California.

There will be a Commemorative Edition of the sportiest Viper, the ACR, even a VooDoo Edition.

The decision to slay the Snake, as the Viper has long been known to fans, comes at a time when Fiat Chrysler is killing off other slow-selling passenger car models, notably the Dodge Dart and Chrysler 200 sedans. That reflects the growing shift in the American market to SUVs and other light trucks.