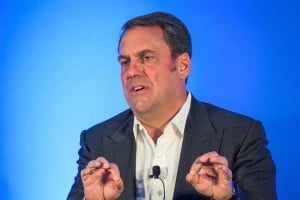 When General Motors decided to banish the word, “powertrain,” recently, in favor of “global propulsion,” it might have been easy to dismiss the announcement as just the work of some buzz-brained consultant. But a closer look suggests GM might really be onto something.

The new name for what used to be called the powertrain division is part of the broader realignment of General Motors’ vast product development empire – a shake-up that reflects the rapidly changing nature of the global auto industry. While automobiles will remain mechanical devices, more and more of that hardware is electrical – and it is largely being operated by increasingly smart electronic control systems, said Mark Reuss, GM’s global car czar.

Add the fact that where and how people drive could be changing dramatically – with some researchers predicting that millions of motorists will trade their car keys for smartphone apps that can summon ride- and car-sharing services.

“The future is almost here,” and if GM doesn’t adapt it will surely be left behind, said Reuss, whose own father, a former General Motors president, oversaw a series of dramatic shifts at the company three decades ago.

(Nissan and Renault set to launch 10 autonomous vehicles by 2020. For more, Click Here.)

Two new models provide a clear hint of the direction GM expects to take going forward: the second-generation Chevrolet Volt plug-in hybrid, and the all-new Chevy Bolt, the first long-range battery car priced for the mainstream market. While Reuss wouldn’t go deep into future product plans, he made it clear GM expects the majority of its vehicles eventually will be “electrified,” whether that means conventional hybrid, plug-in, pure battery-electric or even hydrogen fuel-cells.

The newly renamed Global Propulsion Systems will oversee the development of the technology to use to drive those vehicles, as well as models using more conventional gas and diesel powertrains.

As part of the product development shake up, GM has created three other groups focusing on future vehicle technologies. Development of alternative-powered vehicles will be the purview of Pam Fletcher. The head of the Volt and Bolt development programs, she now runs the entire Electric Vehicle Program unit for GM.

GM veteran Travis Hester will focus on more conventional gas and diesel vehicles. Think of them as the cash cows that will be used to fund the development of more advanced vehicles and vehicle technologies, especially autonomous vehicle systems.

It’s the “cash and market share” from vehicles like the Chevy Silverado and GMC Yukon that “will provide the money for what Doug Parks is doing,” explained Reuss, who acknowledges It will be some time before those battery cars and self-driving vehicles become serious contributors to GM’s bottom line.

While that might give reason for pause, Reuss – along with his bosses, CEO Mary Barra and President Dan Ammann – is convinced these new technologies will transform the automobile industry. How soon they’ll dominate, well, Reuss insists he is “not smart enough” to figure that out. But despite some caution, “I can’t be overly skeptical. We can’t afford to be.”

If anything, all these new technologies will begin to phase in over the next decade. Systems like blind spot monitoring, forward collision warning and active cruise control are becoming increasingly common already, notes Reuss. And GM’s next big move comes with the planned, 2017 launch of Super Cruise, a semi-autonomous system that will be introduced first on the new Cadillac CT6 sedan.

Fully autonomous vehicles are expected to start rolling out by the beginning of the next decade, and they will “change the game,” suggested a newly released report from the Boston Consulting Group.

BCG looked at the potential impact of new car- and ride-sharing services, such as Car2Car, Turo and Uber. By the end of the decade, the study predicts there will 35 million subscribers worldwide. And the industry will lose as many as 550,000 sales from those who will no longer want to own a vehicle. But the big hit likely won’t come until the end of the next decade, when completely driverless cars will take to the streets, “erasing the distinction” between personal ownership and vehicle sharing services.

(To see more about why GM expects more growth in China, Click Here.)

“We want to look at the whole picture,” and be prepared however the market shifts, Reuss said during an interview in his office at General Motors’ huge Technical Center in the Detroit suburb of Warren. “There are going to be a lot of opportunities for growth, but they’re not to be the same as in the past.”