“Hardly any switches,” in high-tech interior. 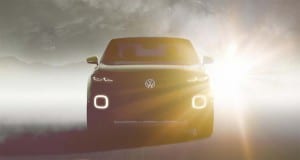 Volkswagen’s product line-up has a big hole in it, though nothing too big a couple of new SUVs couldn’t fill.

The German maker has already laid out plans to launch a production version of its popular CrossBlue Concept SUV. Now, it’s offering a hint of what else it has in mind for a more “trendy, affordable” SUV for its line-up.

The so-far unnamed SUV Concept will make its debut at the Geneva Motor Show next month, alongside a new version of VW’s little “Up!” city car. That includes gas and diesel-powered versions of the little hatchback, as well as alternatives using natural gas and battery power, VW hints.

When it comes to details about the new SUV Concept, VW suggests that it offers “a realistic perspective on a completely new model series.”

The new ute will slot into the VW line-up below the new CrossBlue coming off VW's US line.

The new ute will help flesh out a yawning gap between VW’s current base ute, the Tiguan, and the high-line Touareg. We’ve already seen the first of two promised new utes, the model that will be based on the CrossBlue. Whether it keeps that name or goes for something more exotic has yet to be confirmed.

In keeping with the German maker’s recent trends – and statements senior executives have been making lately – we’re expecting that the production version of this concept will feature an equally broad range of alternative choices. A full electric is a strong possibility, as is a plug-in hybrid.

Notably, VW describes the SUV Concept as a “conceptual bridge to the BUDD-e,” the edge concept minivan that Volkswagen rolled out during a presentation at the 2016 Consumer Electronics Show in January. BUDD-e introduced a number of cutting-edge technologies, including the ability to operate home automation technology right from the infotainment screen.

(New documents could cause trouble for VW. Click Here to find out why.) 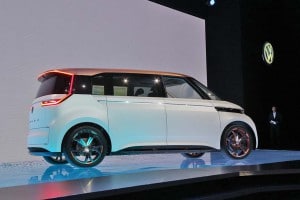 Whether it will share BUDD-e’s electric drivetrain is something we’ll hope to find out when VW firmly lifts the covers at the Geneva Motor Show on March 1st. The mainstream version of the ute is likely to opt for VW’s new 1.4-liter turbo gas engine.

As for the fundamental platform, the production version of the SUV concept is expected to share the same architecture as the current Golf family, what VW calls the MQB. That’s also shared with the bigger Tiguan model.

VW desperately needs to expand its SUV line-up. Light trucks, in general, accounted for 58% of the U.S. market in 2015 and, if anything, utility vehicles could gain as much as 10 more points of share this decade, according to various industry analysts.

With Ford adding four utes, Hyundai at least three, VW desperately needs to get into the gain with at least couple new ones of its own.