Sales in North America and China lead maker to profitability. 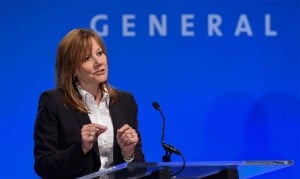 Despite continuing losses in Europe and South America, General Motors posted a record profit of $9.7 billion, or $5.91 per share, for 2015 with much of that coming on a $6.3 billion, or $3.92 per share, fourth quarter.

“It was a strong year on many fronts, capped with record sales and earnings, and a substantial return of capital to our shareholders,” said Chairman and CEO Mary Barra.

The profits came due to improved margins. GM’s revenue essentially remained flat for the year – $153 billion versus $156 billion in 2014 – but the company produced higher margins of 10.3% and higher transaction prices as consumer interest in trucks and crossovers continued to grow.

Chief Financial Officer Chuck Stevens said he wasn’t worried about the full-year drop in revenue, blaming currency fluctuations for about a $10 billion decline. “Size for size sake is not something that drives us,” he said. “Growing profitability is much more important to us than growing revenue.”

The drop in revenue was expected by analysts, who predicted revenue to come in just shy of $145 billion. In fact, the company was bullish on results for 2016. GM said it was raising the dividend by 2 cents per share to 38 cents per share and re-affirming its guidance for 2016. GM executives said last month the automaker expects to earn $5.25 and $5.75, up from the prior outlook of $5.00 to $5.50 provided on Oct. 1, 2015. The company also expects improved EBIT-adjusted, EBIT-adjusted margin and automotive adjusted free cash flow.

While the automaker took its usual hit in Europe, the gap narrowed: it lost just $813 million compared with $1.3 billion in 2014. In South America, the losses widened to $622 million from $180 million the previous year. All of those results are before adjustments for taxes and interest.

(Click Here for details about Ford’s expectations for Europe.)

However, those regions were more than offset by China, which came in at $1.4 billion for 2015, a slight increase over last year, despite a slowing economy in the country. Unsurprisingly, the company led to the promise land of profitability by the record year of sales in North America. GM nearly doubled its pre-tax and interest profits on a year-over-year basis rising form $6.6 billion in 2014 to $11 billion.

The increased profitability allowed the automaker to plow some cash into programs viewed as important to future growth.

“We continue to strengthen our core business, which is laying the foundation for the company to lead in the transformation of personal mobility,” Barra said. “We believe the opportunities this will create in connectivity, autonomous, car-sharing and electrification will set the stage for driving value for our owners for years to come.”

GM invested $500 million in ride-hailing service Lyft, and another $35 million-plus on Sidecar Technologies, which provided similar services.  The automaker announced plans to start its own car-sharing service, Maven, as it prepares for the next generation of transportation.