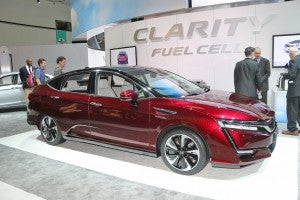 Honda has put a price tag on the new Clarity Fuel-Cell sedan it plans to launch in the U.S. later this year. For $60,000, you’ll be able to buy what proponents bill as the cleanest technology on the highway.

But what exactly is a fuel-cell, and where do you get the hydrogen needed to bill a vehicle that the Honda Clarity. With three of these vehicles set to be on sale by year-end, it’s probably a good time to get down to some of the basics. Here are 10 key questions – and answers – about fuel-cell technology.

Q: What exactly is a fuel-cell vehicle?

A: A fuel-cell vehicle is, in some ways, very similar to a battery car. Electric motors provide the traction. But instead of relying on a battery, the motors draw power from a device called a fuel-cell stack.

Q: But how does that stack work?

A: It forces hydrogen, normally stored in either liquid or gaseous form, through a permeable membrane coated with exotic metals like platinum and rhodium. That causes it to combine with oxygen from the air to form water vapor. In the process, electrons are stripped from the hydrogen atoms and used to power those electric motors. 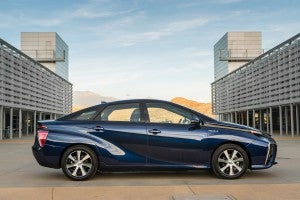 The new Mirai will get an equivalent of 67 miles to the gallon, according to Toyota.

Q: What’s the advantage? Why not just use a battery?

A: Current battery technology is expensive, heavy and limited in range. It also requires relatively lengthy charging cycles. Hydrogen-powered vehicles like the Honda Clarity, Toyota Mirai and Hyundai Tucson Fuel-Cell Vehicle can deliver as much as 300 miles on a tank of the gas, in line with what a gasoline-powered vehicle gets. And you can refill in three to five minutes. That’s why some proponents like to call fuel-cells “refillable batteries.”

Q: But where does the hydrogen come from?

A: The irony is that hydrogen is the most abundant element in the universe but relatively difficult to obtain in its pure form. Gasoline and natural gas, for example, are hydrocarbons, and you can get H2 by refining them. Another approach is to split water into its component atoms – two parts hydrogen, one part oxygen — most commonly through electrolysis. That’s a common high school science experiment.

Q: But if it comes from petroleum, is it clean and renewable?

A: It all depends. If you’re getting hydrogen from oil, natural gas or coal, you still create some CO2, though the emissions are generally cleaner than running gasoline through an internal combustion engine. If you use wind, solar or geothermal energy to electrolyze water then hydrogen is a truly zero-emission, renewable fuel. And remember, you have to generate the power used in a battery-car, too, so critics contend you are just displacing emissions from the tailpipe to a smokestack.

Q: What about nuclear energy?

A: An interesting approach that has been proposed would use excess heat from the latest nuclear generator technology. Instead of using electricity, H2O splits on its own when heated to something north of 900 degrees. 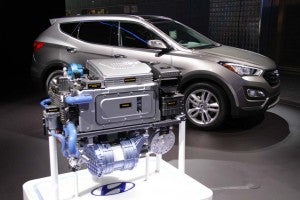 The Hyundai fuel cell stack shown in front of the Tucson. The entire package fits under the hood where a gas engine would normally go.

Q: How much does hydrogen cost? And is it cost-competitive?

To give that some perspective, the Toyota Mirai gets about 67 miles per kg. That would — at the figures quoted — work out to around 8 to 15 cents a mile. A comparably sized gasoline car getting, say 35 mpg, would cost less than 6 cents a mile at the current national average for gas. But if/when fuel returns to $4 or so, as is eventually likely, that would work out to 12 cents or so.  Electricity is generally cheaper, especially if you use a time-based home plan to charge overnight. Charging at commercial chargers, the gap is smaller.

Q: I could charge my electric vehicle at home. Could I fill up my hydrogen car?

A: There have been prototype systems that would use a home’s natural gas supply to produce pure hydrogen. It would be cleaner, on a per-mile basis, than using gasoline, but not a true zero-emission fuel. But, as we noted, the electricity you use may be coming from coal or natural gas generators, too.

Q: Where would I get my hydrogen otherwise?

A: That’s the biggest problem. Right now, there are less than a score of hydrogen pumps available for consumer use in the country. It’s a bit of a chicken-and-egg problem. You need fueling stations to justify selling the cars, and vice versa. And that’s why vehicles like the Clarity and Mirai are only being sold in select markets, primarily Southern California. But California regulators have a plan to set up a statewide network of pumps by 2020, and several other states – and countries including Germany and Japan – are laying out similar plans.

(Lexus could put LF-FC hydrogen car concept into production by 2020. Click Here to check it out.)

Q: Are other automakers planning to offer fuel-cell vehicles?

A: Quite a few of them are, in fact. The list includes Daimler, which will have a Mercedes-Benz model ready next year, as well as Ford, Toyota’s Lexus brand, BMW and General Motors. GM is in a partnership with Honda and the two are reportedly planning to build and jointly operate a fuel-cell factory by 2025.

(For more on the GM-Honda fuel-cell factory, Click Here.)