Production model expected to be based on Toyota CH-R. 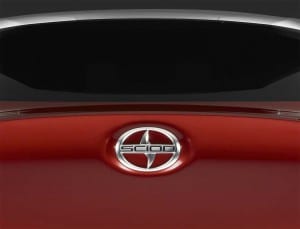 Scion will show the rest of its new concept vehicle at the L.A. Auto Show on November 18th.

While the teaser image the maker has released doesn’t provide much guidance, insiders have dropped broad hints that the brand is getting set to add its first utility vehicle, and the Scion show car is based on the new Toyota CH-R.

“Following the recent introduction of the Scion iM 5-door hatchback and the sporty Scion iA sedan, the youth division of Toyota is preparing to further expand its lineup with a third all-new vehicle, beginning in 2017,” Scion stated in a terse release.

Even that leaves room for interpretation: whether the new model will enter the line-up at the beginning of the 2017 model-year – or roughly a year from now – or during the 2017 calendar-year.

(Click Herefor a review of the new Scion iM.)

What’s unambiguous is Scion’s need to turn things around. Initially created to draw in the sort of Gen-X buyers who were largely steering clear of the Toyota brand, Scion made an early break-out with distinctive, if quirky, products like the original xB. Sales surged to 173,000 in 2006, but last year they plunged to just 58,000, and the boxy xB will soon vanish from showrooms. 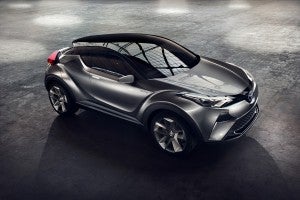 Toyota revealed a second version of the C-HR concept in Frankfurt last month.

Part of the problem was that Scion seemed to miss changing trends as Millennials became the new go-to generation for the auto industry. Surprisingly, the brand completely missed the SUV/crossover trend. In fact, it didn’t even offer its first sedan until this year. And even then, it had to turn to Mazda for help, rebadging that maker’s little Mazda2 as the Scion iA.

(Scion open to “any suitable product” in bid for turnaround. Click Here for more.)

That new model is being joined for 2016 by the sportier iM coupe. But in an interview late in July, outgoing Scion General Manager Doug Murtha told TheDetroitBureau.com that, “I’d be open to a pickup or crossover,” with a higher emphasis on the latter.

Murtha also said, “I’d be very interested in an all-wheel-drive vehicle.” Much like Toyota’s upscale Lexus brand discovered after adding that traction-enhancing technology to its line-up, “It’s a way we (at Scion) could increase our share in some colder climates.”

In its early years, Scion tended to get hand-me-down products sold by Toyota in Japan and other overseas markets, but in its bid to rebuild, the brand is starting to get some newer models, as is likely to be the case if, as expected, it adds the Toyota C-HR to the U.S. line-up. 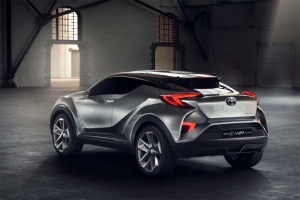 The Toyota C-HR picks up on the general drive for dynamic styling at Toyota's various brands.

The pint-sized SUV was first unveiled in concept form at the 2014 Paris Motor Show, returning to the Frankfurt Motor Show last month in near-final trim. The production model, according to Toyota, will be unveiled next spring in Geneva.

Where the original show car was a three-door hatch, the production model is expected to add two more doors. But it will keep the so-called “diamond-shaped” design language, with sharp edges, a bold grille, large air intakes, flared fenders and an aggressively tapered hatch.

Whether the concept’s hybrid drivetrain will be carried forward is unclear. And it would be more likely to be used in a Toyota version of the ute than in a Scion. In his July interview, Murtha said the little brand is likely to shy away from gas-electric drivelines because of their added cost – a stretch for Scion’s young target audience.

We should find out more about the new Scion concept vehicle at the L.A. Auto Show on November 18th, where it will be unveiled by Murtha’s replacement, the brand’s new General Manager Andrew Gilleland.

(For more on the Toyota C-HR Concept, Click Here.)