But CEO Horn gets a new boss, and management shake-up expected to continue. 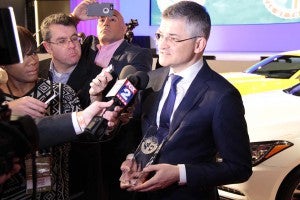 Michael Horn, head of VW of America, was all smiles accepting the North American Car of the Year Trophy for the new VW Golf.

(This story corrects and expands upon an earlier story that had incorrectly reported VWoA CEO Michael Horn would lose his job in the U.S.)

Michael Horn, the head of Volkswagen’s U.S. operations, has dodged the bullet. But while he won’t find himself among the growing list of senior VW executives ousted in the wake of a diesel emissions testing scam, the VW veteran will find himself reporting to a new boss as part of a broader corporate shake-up.

Winfried Wahland, who has been overseeing Volkswagen AG’s Czech-based Skoda brand, has been named director of the new North American Region office, and he will take a seat on VWAG’s all-powerful Supervisory Board.

Horn had been expected to lose his job in the wake of the scandal touched off by the discovery that Volkswagen had secretly rigged its small diesel engines to pass emissions tests. On the road, however, the so-called “defeat device” was programmed to permit the engines to produce as much as 40 times the permissible level of smog-causing oxides of nitrogen.

He would have been one of a number of top executives to fall in a management shake-up that began last week when VWAG CEO Martin Winterkorn tendered his resignation. Winterkorn accepted responsibility for the emissions testing scam yet also claim not to have known about it before the cheating program was disclosed by the U.S. Environmental Protection Agency on Sept. 18. 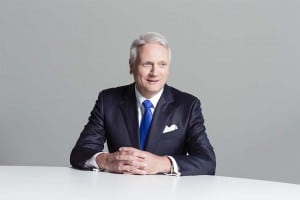 How the realignment of North American operations will work remains to be seen, but it appears to reflect VW’s desperation to head off years of declining sales, a situation expected to grow worse in the wake of the latest scandal.

Horn, a 26-year VW veteran, took over as head of VW of America early last year as part of the company’s increasingly frantic bid to reverse declining U.S. sales. Like his predecessor, Horn put an emphasis on diesels as a way to differentiate Volkswagen from rivals like Toyota, Honda and Chevrolet. During the last several years, those “oil burners” have been making up about a quarter of the company’s U.S. sales.

VW had billed its 2.0-liter “clean” diesel as a way to get low emissions, high mileage and the sort of performance that other green alternatives, such as hybrids, couldn’t match. 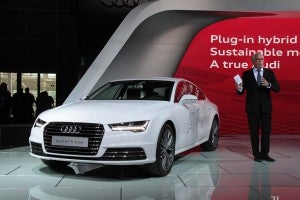 The EPA earlier this month revealed the problem and said it impacted 482,000 VW vehicles equipped with four-cylinder diesels sold in the U.S. over the last seven years. Since then, the maker has confirmed the suspect code was installed on 11 million vehicles sold worldwide by the VW, Skoda, Audi and other brands.

Vahland, who has been serving most recently as the head of the Czech-based Skoda, previously served as VW’s Group CEO for China. Volkswagen is the largest manufacturer in that huge Asian market.

By the time Vahland officially takes on his new assignment on Nov. 1, observers expect to see a number of other management changes at Volkswagwen. The VW board already has suspended three of its top engineers, Heinz-Jakob Neusser, head of brand development at the flagship VW marque, Audi R&D chief  Ulrich Hackenberg, and Wolfgang Hatz, who had the same job at Porsche.

Former CEO Winterkorn, meanwhile, is now the key target in an investigation launched by federal prosecutors in Germany. And he could be a person of prime interest as the U.S. Justice Department gets its own criminal investigation underway.

(For more on the German investigation of former CEO Winterkorn, Click Here.)

VW faces a variety of legal challenges and abroad, criminal as well as civil. A number of class actions have already been launched, and the EPA could fine the maker more than $18 billion for violating the U.S. Clean Air Act.