But crossover likely to be next-generation Juke. 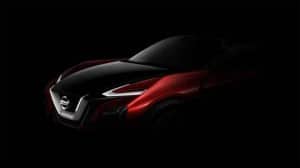 Nissan's show car teaser has kicked off plenty of speculation prior to the Frankfurt Motor Show.

Who is that masked man? Or so went the line from the old Lone Ranger TV show. Lately, the question might be, what is that masked car? There’s been plenty of speculation about the teaser image Nissan has released in advance of its news conference at the Frankfurt Motor Show.

Unlike some manufacturers who have given us a clear sense of what to expect next week, Nissan has issued only a most cryptic comment, its news release asking, “”So can Nissan continue to innovate and move the bar higher? What if Nissan created a new way to feel driving excitement? The answer will come at the Frankfurt Motor Show.”

Among the wilder theories, some are speculating this mystery vehicle might be an all-new replacement for the Nissan Z-Car. Considering the huge migration from passenger cars to utility vehicles, perhaps that might actually make a bit of sense. But the reality is likely a lot simpler.

Nissan has been a pioneer in the crossover segment and currently offers three models in Europe: the Qashqai, the X-Trail and the Juke, the latter model now the only one sold in the U.S.

Barely a week ago, Nissan announced plans for the next-generation Juke, confirming it will continue to be produced at the maker’s plant in Sunderland, England. 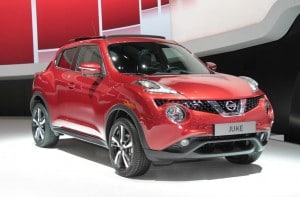 The new concept vehicle is apparently the replacement for the current Nissan Juke.

And, it seems, the new concept coming to Frankfurt will give us a sense of what that new Juke will look like, several Nissan sources told TheDetroitBureau.com. If tradition holds, the show car is likely to be very close to the design of the upcoming production model, at least from an exterior standpoint. The interior may be a little more of a fantasy, as has been the case with several recent Nissan concepts.

A close look at this teaser image reveals what will soon become the new face of the Nissan brand. But we got a first hint of what’s coming in the form of the Sway concept. Unveiled at the Geneva Motor Show last winter, it is morphing into the latest version of the Nissan Micra.

The new teaser seems to bear out Nissan’s promise to “innovate and move the bar higher,” suggesting that, among other things, the next Juke will get such niceties as LED lamps.

One reason for so much interest in, and speculation about, the teaser image is that it uses the same red and black colors as the 240Z rally car that won the 1971 East African Safari rally.

While the Frankfurt show car won’t be the eagerly anticipated replacement for the current 370Z, there remains reason to expect something dramatic when the next Z is unveiled. Nissan officials have openly spoken about making major changes, leading some to expect it will be based on another show vehicle, the iDx coupe unveiled two years ago at the Tokyo Motor Show.

For his part, Nissan’s Chief Creative Officer Shiro Nakamura has said that, “We need to take another path. I feel Z needs more revolution than evolution.”

(Click Here to check out the hottest new cars, trucks and crossovers for 2016.)