The hunter is now becoming the hunted. For much of the last two years, Tesla Motors has been working its way down the pricing chain in the quest to gain customers from more traditional automakers.

Now Tesla and its Model S is in the crosshairs of Aston Martin and its battery-powered Rapide luxury sedan. Expected to hit showrooms in two years, the 800 horsepower beast has a range of 200 miles, according to Aston officials.

Actually, the Rapide and Model S may not be in the same class as the Rapide is expected to come in between $200,000 and $250,000 and the highest priced Model S is just over $140,000, but Aston’s move shows that there isn’t just growth in the bottom end of the EV market.

“What Tesla clearly shows you is we haven’t hit the ceiling in terms of price,” Aston Martin CEO Andy Palmer told Automotive News during this weekend’s Concours d’Elegance. 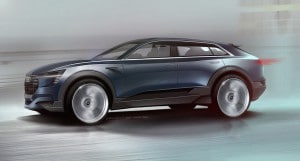 Audi's e-tron quattro concept is expected to come to showrooms as competitor for the Tesla Model X.

While the electric Rapide produces 800 hp, it is unlikely to match the 2.8-second zero-to-60 mph time of the Model S when it’s in Ludicrous mode. Palmer called that kind of performance “stupid” and that the Rapide’s strength will be on a road course, not the drag strip.

Palmer added that the Rapide would be followed by an all-electric DBX crossover by the end of the decade, the report said. That news comes as Audi announced it’s planning a competitor for Tesla’s soon-to-arrive Model X.

The German luxury maker is showing the e-tron Quattro concept at the Frankfurt Motor Show next month. The SUV fits between the Q5 and Q7 gets 310 miles on a charge, Audi said. The Model X is expected to get between 170 and 230 miles on a single charge, according to reports. The Model S gets 270 miles. Reports are that it will arrive in dealer showrooms in 2018 sporting the Q6 moniker.

(Click Here for details about Audi’s plans for a 300-mile-plus EV battery.)

The SUV will be powered by three electric motors, in a manner similar to Audi’s R8 electric vehicle: one on the front axle and two on the rear axle. While Audi did not provide any details about the SUV’s performance, there are several reports suggesting the new model will develop 500 hp and 517 pounds-feet of torque.

Tesla can’t even win at the bottom end of the price point with its Model 3, which isn’t expected until 2017 at the earliest. Chevrolet is bringing the Bolt to dealers at a price point of less than $30,000 – after $7,500 in federal tax credits – with a range of 200 miles, according to the company. Both are the target ranges for Tesla’s entry-level model.