Saleen Selling Off Assets in Bid for Cash

Offering rights to S7, S7R, Raptor – and a few chassis and frames. 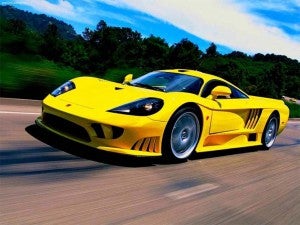 Anybody – well, anybody with enough cash, anyway – can own a Saleen S7, or even the track-ready S7R. But how would you like to own the actually rights to those and the never-produced S5S Raptor? In an unusual move, the company is offering up the basic intellectual property, along with the parts that might help you start to build a few of those supercars.

In a highly unusual move, the company says it will see off the IP rights to those three models, as well as a handful of never-completed chassis and frames. It has turned to auction house GA Global Partners to handle the sale.

“These prized assets have been kept in safe storage for the past five years which makes this a truly rare and historic opportunity to own all assets and rights to the first ‘Great American Supercar,’ and allow a new owner to continue the legacy with the S5S Raptor,” said Adam Alexander, CEO of GA Global Partners.

Saleen Automotive was launched by race driver Steve Saleen three decades ago and initially focused on a mix of motorsports and tuned, high-performance Mustangs. Over the years, the company has also tweaked a few competitors, including the Chevrolet Camaro and Dodge Challenger and recently announced it is upgrading the performance of the Tesla Model S – though Tesla itself is doing a good job with its Insane and newly announced Ludicrous modes. 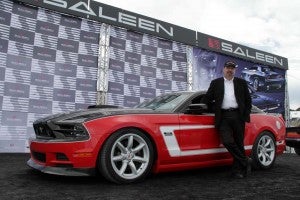 In 2000, Steve Saleen revealed his own supercar – which it claims was the first of its kind from the U.S. Debuting at the August Pebble Beach Concours d’Elegance, it used a modified Ford 351 V-8 to generate 550 horsepower, a blinding number at the time. Five years later, however, Saleen introduced a twin-turbo powerplant that bumped that to 750 hp and a rated top speed of 248 mph.

A racing version, the S7R, also debuted in 2000 and continued through 2007. It ran in a number of different series and even earned a podium finish in its class at the 24 Hours of Le Mans, taking 18th place overall.

(To get a look at the latest Saleen Mustang, Click Here.) 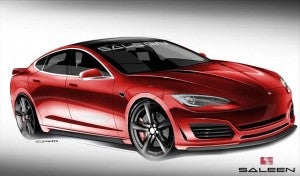 A preliminary sketch of a Saleen-tuned Model S that ultimately became the Saleen GTX.

The S5S never made it into production, however, with Saleen Automotive running into a series of financial snags that saw its founder temporarily leave the firm  and attempt to set up a new company, SMS Supercars. He returned in April 2012.

But Saleen Automotive has continued to face problems. Despite going public in 2013, its recent filing the U.S. Securities and Exchange Commission shows it has fallen behind on rent, payroll and debt payments. It lost $5.3 million last year and reportedly has just $21,000 in cash on hand at the moment.

(Want to know more about the Saleen’s plans for the Tesla Model S? Click Here for the story.)

That has raised, “substantial doubt about our ability to continue as a going concern,” the company states, triggering what could become an asset fire sale – unless  GA Global can churn up enough interest in the upcoming auction.

It’s not the first time a buyer has had the chance to acquire the intellectual property of a once-glorious automobile. After the collapse of Studebaker, the distinctive Avanti found a new home and continued in production, with a series of updates, for several decades. The Saab 9-5 is now owned by a Chinese firm that wants to put it into production with an electric powertrain, and new Chinese owners recently announced plans to restart production of the Fisker Karma plug-in hybrid.

(Click Here for more on the planned Fisker revival.)

At one point, as it struggled to rebuild after its 2009 bankruptcy, Chrysler and new partner Fiat considered selling off the assets to the Dodge Viper. They eventually decided to keep the car – apparently finding no one willing to meet their price. But considering the currently weak demand for the V-10-powered two-seater, CEO Sergio Marchionne probably wishes a deal had gone through.