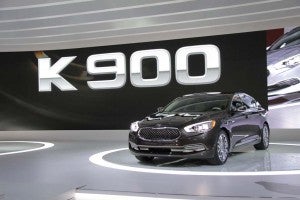 The premium kuxury Kia K900 sedan was the highest-ranked vehicle ever in the VSA.

Step aside, Mercedes-Benz, BMW and Audi, there’s a new king-of-the-hill. Make that two of them, Korean siblings Kia and Hyundai together nudging aside European manufacturers with the high-score in the new Vehicle Satisfaction Awards.

The big Kia K900, a Korean alternative to such premium luxury models as the Mercedes S-Class and BMW 7-Series, scored an all-time high in the annual VSA study based on ratings submitted by over 66,000 U.S. new car buyers. But General Motors had more winners in individual vehicle segments than other manufacturer.

“2015 represents a year of diversity,” says George Peterson, president of AutoPacific, Inc., the California research firm that conducts the Vehicle Satisfaction Awards. “Competition is fierce and no one automaker dominates the results.”

A total of 274 models were considered for the 2015 VSA, representing 33 brands and 11 different manufacturers – nine of which took at least one segment winner, noted Peterson.

Together, the Korean makers won four of the 23 segment awards, tying for leadership in a fifth, with models such as the midsize Hyundai Sonata sedan and compact Kia Soul. But the most notable win was in the Luxury Car segment where some of the industry’s toughest competitors are grouped.

(What brands are best at turning shoppers into buyers? Click Here to find out.)

The Kia K900, the maker’s first true luxury model, took down such stalwarts as the S-Class and 7-Series. More notably, the K900 had the highest overall score in the history of the VSA – a benchmark last set in 2014 by the then-new Mercedes S-Class – taking AutoPacific’s President’s Award.

That helped propel the two Korean partner brands to a collective first place among the 11 manufacturers in the U.S. industry included in the 2015 Vehicle Satisfaction Awards.

“Kia and Hyundai are continually improving owner satisfaction in key areas like reliability and quality, yet are also hitting the mark with safety, braking, handling, styling and seat comfort, not to mention a very satisfying warranty program,” explains Peterson.

The strong showing by the Koreans was not a fluke. Hyundai and Kia have been gaining ground in a variety of different studies in recent years. Only last month they surged to the top ranks in the closely watched J.D. Power Initial Quality Study, Kia landing second only to top-ranked Porsche. 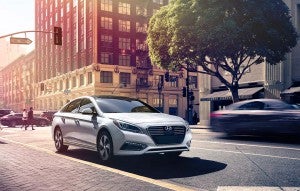 The Hyundai Sonata was one of numerous Korean segment winners in the 2015 VSA.

Had the K900 not scored so well, Ford’s completely redesigned 2015 F-150 pickup would have been the top model in this year’s VSA, also nabbing the President’s Award. The aluminum-intensive truck did win in the Light Duty Pickup segment. Meanwhile, the Ford F-Series Super Duty was tops in the Heavy Duty Pickup category.

The new study suggests that automakers have been making major improvements in both quality and in so-called “surprise-and-delight” features. The average score for this year’s study was 25 points higher than in 2014. The brands making the greatest year-over-year improvement were, in order, Jaguar, Volkswagen and Ford.