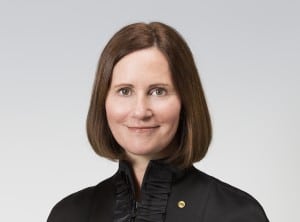 (This story has been updated to include mention of the U.S. ambassador to Japan’s involvement in the Hamp case.)

Japanese authorities are expected to release Julie Hamp, the 55-year-old American who until last week had served as Toyota Motor Co.’s global communications chief – and who had been the highest-ranking woman in the company.

The 55-year-old Hamp had been held in a Tokyo jail since June 18th when she was arrested for allegedly bringing the drug oxycodone into Japan illegally. Authorities subsequently raided three different Toyota offices, including its headquarters in Toyota City. While the maker’s President Akio Toyoda voiced his support for Hamp shortly after her arrest, the New York-born executive last week tendered her resignation.

“The prosecutors appeared to have taken into consideration the fact that the 55-year-old American’s act was not malicious and that she has already resigned from the post at the Japanese automaker,” the Kyodo news service wrote on its English-language website, citing “investigative sources.”

If the fact that Hamp resigned has anything to do with the decision by prosecutors it may, in fact, support the contention by a number of observers that her arrest and threat of prosecution may have been influenced by the fact that she was a foreigner and one of the highest-ranking women in the normally male-dominated Japanese business world.

A separate report in the English-language Japan Times noted that since Hamp’s arrest, “The police have judiciously leaked information to bolster their case,” suggesting Hamp did not actually need the narcotic pain killer, and triggering such xenophobic headlines in local media as, “Diversification a Problem for Japan.”

Hamp was being held virtually incommunicado in a cell with other prisoners, none allowed to refer to each other by name, according to reports from Japan. She was allowed only one 20-minute visit from an outsider per day, along with contact with her lawyer. She could be questioned repeatedly by authorities without a lawyer present.

The country’s laws allowed her to be held for up to 23 days without charges, and were she charged she might have stayed in jail until a trial began. Japan aggressively prosecutes drug cases and authorities claim a conviction rate of around 99%.

Specific details of what actually happened have not been clear, but Hamp reportedly acknowledged using oxycodone for knee problems. The drug was apparently found in a shipment from the U.S. that contained jewelry. There are various reports indicating she either made the shipment herself or that the package was sent by a member of her family.

A one-time senior PR executive at General Motors, Hamp resigned to take the top communications post at PepsiCo. She returned to the auto industry in 2012 to run Toyota’s top U.S. public relations office. In April of this year she was recruited by Akio Toyoda, the grandson of Toyota’s founder, to move to Japan, becoming not just the first foreigner to head communications but the first female in such a senior position anywhere in Japan.

Following her arrest, Toyoda staged a widely followed news conference in which he referred to Hamp as his “friend,” and an “invaluable” asset to the company. He also tried to deflect some of the criticism that followed her arrest, taking personal blame for not helping her properly prepare for the move to Japan.

“To me, executives and staff are like my children,” he said. “It’s the responsibility of a parent to protect their children.”

If anything, that news conference appeared to raise even more hackles in Japan. A media Q&A session was peppered with thinly veiled, derogatory questions about women and foreigners, according to reports that followed.

Authorities in Japan have not yet confirmed their plans for proceeding with the case but they are coming up to the end of the 23-day holding period. A spokesperson for Toyota noted the company is now “trying to check” what will happen next.

Toyota appears to still be providing at least some assistance to Hamp, even though she resigned on July 1. The company said it accepted the resignation because of “the concerns and inconvenience that recent events have caused our stakeholders.”

(For more on Hamp’s resignation from Toyota, Click Here.)

Japanese officials have yet to comment on the news reports. Meanwhile, the Detroit News reported that Hamp’s case got a boost from the U.S. ambassador to Japan, the paper noting, “Hamp’s case has drawn the attention of the U.S. ambassador to Japan, Caroline Kennedy, who earlier this year worked for the release of an American teacher who was arrested after importing a drug for attention deficit disorder.”