Nearly $800M investment focuses on work with aluminum and steel. 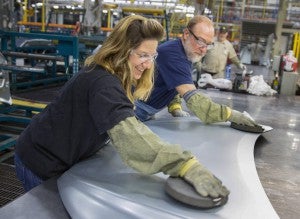 GM invested nearly $800 million in three Michigan facilities, in part, to allow them to use more aluminum in production.

General Motors has dropped a big hint about its future vehicle plans this week – and that could mean a major shift from classic steel to aluminum bodies in the coming years.

The move would follow the lead set by rivals such as Ford Motor Co. – which launched an all-new, “aluminum-intensive” version of its F-150 for 2015 – Audi and Jaguar, the latter two adopting the lightweight material for a number of new luxury models. So-called “lightweighting” has become a critical goal for the auto industry as it struggles to meet tough new emissions and fuel economy standards.

A possible switch to aluminum by GM was hinted at during a news conference revealing the maker’s plan to invest $5.4 billion in new plants and equipment. That includes a revamp of the prototype plant in Warren, Michigan where GM builds the first iteration of new vehicles under development before they are transferred to the assembly plant where the finished product is assembled.

Cathy Clegg, GM vice president of North American manufacturing, said the new prototype plant in Warren would be capable to handling both aluminum and steel bodies and also bodies made of blended steel and aluminum components. “The new plant will be able to handle both,” she said.

But its biggest step to date comes with the development of the new Cadillac CT6, noted Clegg. Set to reach showrooms later this year, the luxury brand’s new flagship sedan will use aluminum for most of its body, but retain a steel firewall and floor pan.

That aluminum-intensive approach required it to develop new manufacturing methods that could not just produce but also assemble the different metals into a single body shell.

Ford completely tore up its two F-150 assembly plants to enable them to handle aluminum manufacturing. It is not yet clear whether the planned $5.4 billion investment will similarly permit use of aluminum in specific GM plants beyond the Warren prototype facility.

But industry experts stress that with the U.S. auto industry facing a 54.5 mpg Corporate Average Fuel Economy standard in 2025, automakers have little option but to expand the use of lighter materials. Aluminum is just one of the options, and there is plenty of interest in carbon fiber compounds, such as those being used for numerous parts on the 2016 Corvette Z06.

(GM dropping $5.4 billion in plants over next three years. For more, Click Here.)

But carbon fiber is extraordinarily expensive and difficult to work with. GM, Ford, BMW and other auto manufacturers are investing heavily in research aimed at making it easier – and cheaper – to use.

Aluminum is also significantly more expensive than steel, and most analysts expect to see it used most extensively on bodies for luxury vehicles – or for trucks like a future Chevrolet Silverado where weight savings could yield significant improvements both in mileage and vehicle capabilities.

The steel industry isn’t ready to walk away from the auto industry, however. New alloys have been developed that are both lighter and stronger. And, as GM discovered during the development of the Cadillac CT6, sandwich-style panels blending steel and other compounds can deliver significant noise reduction benefits.

The plant investment program at GM is just the latest in a series of investments in U.S. manufacturing the company has made since emerging from bankruptcy in July 2009. According to a company-commissioned report from the Center for Automotive Research GM already has spent $11.3 billion upgrading its 40 U.S. manufacturing facilities.

More details about GM’s latest investment program will be announced in the coming months, according to Alan Batey, the head of the maker’s North American operations.