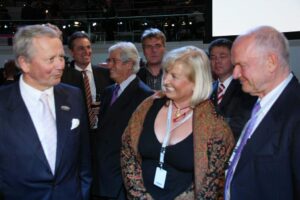 Wolfgang Porsche (l), and Ferdinand Piech with Piech's wife. Piech voiced opposition to his two nieces replacing him and his wife on VW's supervisory board.

It appears that former Volkswagen Chairman Ferdinand Piëch will not go gently into that good night.

Less than a week after resigning his position from the company his grandfather founded, Piech is making news again by opposing the nomination of two of his nieces to board positions at the company.

According to the German magazine Bild, he thinks the women – Julia Kuhn-Piëch and Dr. Lousie Kiesling – lack the experience necessary to be effective replacements for he and his wife on the company’s supervisory board.

The women aren’t exactly automotive neophytes: Kiesling has a degree in vehicle design from the Royal College of Art in London and is the managing director of an Austrian textile maker. Kuhn-Piëch works in real estate sits on the supervisory board of German truckmaker MAN.

Piëch, never shy with his opinions, believes that former Ford executive Wolfgang Reitzle and former Siemens manager Brigitte Ederer should have been nominated instead of the family members.

However, it may all be a moot point: the Piëch nieces were approved as board members and his only recourse would be to sue, according to Automotive News Europe.

Piëch, who has been credited with crafting the growth and acquisition strategy that transformed VW into the world’s second-largest car company, had clashed with other board members over his eventual successor. The 78-year-old Piëch had openly criticized VW’s current CEO, and its likely next chairman, Martin Winterkorn.

Heir to Volkswagen founder Ferdinand Porsche, Piëch, has capitalized on his family connections to play a pivotal role in shaping VW for nearly 30 years. In the process, he has scuttled the careers of other executives who crossed him, including his own hand-picked successor as CEO, Bernd Pischetsrieder.

But this time, he lost a showdown vote by a key supervisory board steering committee, which chose instead to side with Winterkorn, VW’s current chief executive officer and architect of the company’s dramatic turnaround over the past decade.

The internal battle was a rare defeat for Piëch, who himself served as CEO from 1993 to 2002. He has deftly – and often bluntly – used the family’s large shareholdings to reshape a company that was in serious trouble when he became chief executive.

Among other things, Piëch led a rapid expansion of the Volkswagen brand line-up, adding a mix of marques ranging from entry level Seat and Skoda to ultra-exclusive Lamborghini, Bentley and Bugatti.