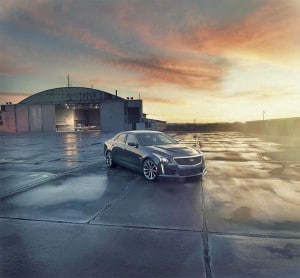 Cadillac’s new 640-horsepower CTS-V will not only be the brand’s most powerful model ever, but also its most expensive sedan ever, at $84,990 including delivery charges.

The third-generation performance sedan is aimed at some of the luxury segment’s toughest competitors, including the vaunted BMW M5. But while it delivers more muscle than the Bavarian performance sedan it remains far from certain consumers will accept the hefty price tag which is about $11,000 more than the outgoing version of the Caddy CTS-V.

“V-Series represents the pinnacle of Cadillac, a brand that now makes drivers’ cars at the highest level,” said Johan de Nysschen, Cadillac president, in a statement. “The new CTS-V is essentially two cars in one: a luxury sedan with sophisticated road manners and a track-capable sports car with awe-inspiring performance.”

The first V-Series model, introduced in 2004, was a version of the original Cadillac CTS sedan and was rough and raw but meant to raise the brand’s awareness – and serve notice on German rivals like BMW, which had built a loyal following for its M performance models. A more sophisticated model of the CTS-V followed the launch of the second-generation sedan. Cadillac then added wagon and coupe versions. 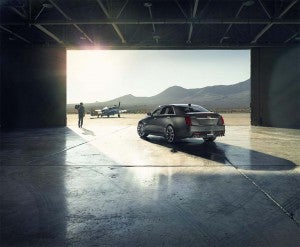 The latest, 2016 version comes to market more than a year after the launch of a completely redesigned Cadillac CTS sedan. Where the original was a “tweener,” sized between the BMW 3- and 5-Series models, the latest CTS grew larger to directly target the 5-Series.

(Caddy planning to drop or replace numerous current models, including XTS. Click Here for the story.)

The Detroit rocket also adds a number of sophisticated features such as magnet ride control, a suspension system that uses a magnetorheological fluid to constantly change damping at each corner to respond to both road conditions and driver input. It’s quick enough to go from full soft to track firm in the time it takes the performance sedan to travel just one inch at 60 mph.

Cadillac put a premium on lightweighting the new 2016 CTS-V with such features as a carbon fiber hood. The performance sedan also shows off its bright red Brembo brakes, and it is shod with new Michelin Pilot Super Sport tires.

The interior features a number of new refinements that, Cadillac officials claim, will make the CTS-V an everyday driver, not just a toy for the weekend.

Since joining Cadillac last year, the brand’s new global president Johan de Nysschen has been arguing that Caddy needs to price its products more in line with its German competitors and stop positioning itself as a bargain brand. That strategy may be working in the booming Chinese market but it has met with some tough resistance in the U.S. where sales slipped last year. Some price adjustments have helped Cadillac regain some momentum in 2015.

The 2016 CTS-V will come to market shortly after sales start for the second model in the Caddy V-Series line-up, the first-ever ATS-V which carries a price of $60,465 plus shipping.

As TheDetroitBureau.com recently reported, Cadillac is planning a major expansion of its performance line-up to coincide with the overall growth of its product portfolio over the next five years.

“The ‘V’ will be on more models than today,” said Dave Leone, Caddy’s chief engineer, though he cautioned that it will not land on every product in the Cadillac line-up. Don’t expect V-Series versions of the Escalade or SRX, he said.

(Click Here for more on Caddy’s plans for the V-Series.)