Texting only part of the problem, finds AAA study. 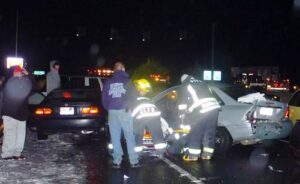 Federal research indicates roughly 11% of all highway deaths are the result of distracted driving. But a new study confirms what has long been feared, the AAA Foundation for Traffic Safety concluding that nearly six out of 10 moderate to severe teen crashes are the result of driver distraction.

The figure is significantly higher than had been estimated previously, the National Highway Traffic Safety Administration concluding distraction played a role in only 14% of teen crashes.

“The in-depth analysis provides indisputable evidence that teen drivers are distracted in a much greater percentage of crashes than we previously realized,” said Peter Kissinger, the president and CEO of the AAA safety arm.

The study was based on the analysis of the final six seconds of data recorded just before a crash taken from 1,700 in-vehicle event recorders. It found that distraction was involved in 58% of teen crashes overall, including 89% of road-departure accidents and 76% of the rear-end crashes.

“Access to crash videos has allowed us to better understand the moments leading up to a vehicle impact in a way that was previously impossible,” said Kissinger. 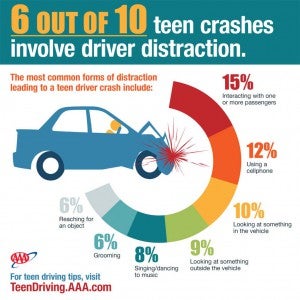 The new report actually might understate the significance of the findings because teens also have a higher rate of crashes than other driving groups. Car crashes are the single-largest cause of death among teens, according to federal data.

Federal reports shows 963,000 drivers between the ages of 16 and 19 were involved in police-reported crashes in 2013, the latest year for which data are available. Those accidents resulted in 2,865 deaths and 383,000 injuries.

Though authorities have often pointed to the use of cellphones – whether to make a call or to text – the study found there are a number of other factors that can distract a teen driver. The most common, responsible for 15% of crashes, involved interacting with one or more passengers. Other major causes blamed for teen distracted driving include:

“It is troubling that passengers and cell phones were the most common forms of distraction given that these factors can increase crash risks for teen drivers,” said AAA Chicago spokesperson Beth Mosher.

The AAA has long supported restrictions on the use of cellphoning by a driver of any age, and the vast majority of states now bar texting while limiting cellphone use to hands-free calling. But enforcement varies widely.

Most states now have some form of graduated licensing in place, meanwhile. In many, teen drivers must have an adult onboard, or may not be allowed to drive with other teens, at least during the initial period after obtaining a license.

(The Golden Age of Driving? Those over 50 make up a larger share of US drivers than ever. Click Here for the full story.)