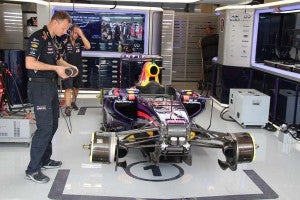 Parked! Red Bull's Formula One team is considering pulling out of the series due to recent rule changes.

Formula One could lose one of its strongest teams. At least that’s the threat being leveled by managers of the Red Bull team who feel recent rule changes were “the wrong solution” for the wildly popular racing series.

It’s by no means the first time F1 has faced the threat of a walkout by one or more teams. There were threats of a coup by some of the biggest players in the series a decade ago, but cooler heads – and the willpower of Formula One chief Bernie Ecclestone – eventually prevailed.

But this time, the concerns of Red Bull carry more weight considering other teams – and many fans – have also expressed frustration at rule changes that impacted the engines those exotic racers rely on.

Red Bull led the Formula One grid for much of the decade, winning four back-to-back world championships before slipping into also-ran status last year. Mercedes-Benz took the championship in 2014 and looks to dominate again this time around.

The shift in leadership comes as rules changes led to a complete engine transformation. The cars are still rocket fast, but many fans have complained about the lack of the classic F1 roar as they race by.

The more serious concern is that only two teams have a chance at now being competitive. And Red Bull fears it isn’t one of them – not after its disappointing performance at the Australian Grand Prix over the weekend where one of its cars didn’t even land on the grid.

“These power units are the wrong solution for F1, and we would say this even if (we) were in the lead,” lamented Helmut Marko, who oversees things for Red Bull chief Dietrich Mateschitz.

“We will evaluate the situation again as every year and look into costs and revenues,” said Marko. “If we are totally dissatisfied we could contemplate an F1 exit.”

(Click Here for details about GM’s alleged cover up of the ignition switch problem.)

The threat of departure by Red Bull has drawn a mixed response. Mercedes’ driver – and Australian winner Lewis Hamilton – declared on Sunday that he would beat anyone no matter what car he was driving.

But F1 boss Ecclestone attempted to sound a somewhat conciliatory note, suggesting Red Bull’s concerns “are absolutely 100% right.” He added that, “We need to change things a little bit now and try and level things up a little bit. We should support the FIA to make changes.”

(To see more about the dropping gas prices, Click Here.)

Whether that will happen remains to be seen. But the current, lopsided nature of the F1 grid could force some action – especially if series planners also want to keep fans happy.