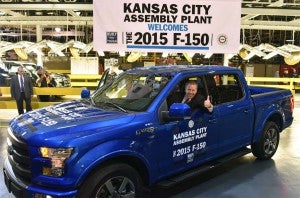 The automaker has spent much of the last year preparing for one of its most dramatic transitions in years by slowly converting two key assembly plants to build the new F-150 – first the Dearborn Truck Plant near Detroit, and more recently, the Kansas City Assembly Plant. The process has been costly and slow, leaving dealers struggling to get enough pickups to meet customer demand.

“With production starting at Kansas City Assembly, we are better poised to start meeting growing customer demand for our pickup,” said Joe Hinrichs, Ford’s President of the Americas. Hinrichs was on hand for the launch of production at the second plant after a 13-week changeover that cost the maker $1.1 billion.

The slow, staggered changeover at the two plants was due to the fact that the 2015 F-150 has adopted an “aluminum intensive” body, rather than the steel body used on the older F-Series and its current competitors. Using the lightweight material requires extensive changes in manufacturing technology, including major updates to stamping, body and paint shops.

On the positive, side, Ford also wound up adding another 900 jobs at the Kansas City Assembly Plant – along with 500 new robots – in large part due to expectations of strong demand for the new F-150.

So far, the maker’s high hopes seem to be backed up by market demand. Ford claims January brought the highest level of F-150 sales in more than a decade. It says it is turning the trucks over in just 18 days, about four times faster than the normal inventory turnover in the full-size pickup segment.

(Ford readies for drop in new car sales and shift to trucks. For more, Click Here.)

The Kansas City plant has been tooled up to handle the standard F-150 packages, as well as some special commercial fleet models, including those with 8-foot cargo beds and heavy payload packages.

The strong initial demand for the 2015 F-150 has been welcome news for Ford. It has billed the launch of the truck as the next big thing, but has been met with some skepticism, especially when fuel economy numbers didn’t match the improvements some had been expecting.

While the F-150 has won a number of high-profile awards, including North American Truck of the Year, it lost several others. Motor Trend, for example, opted for the new Chevrolet Colorado as its Truck of the Year.

Meanwhile, a number of analysts have questioned whether Ford will take a serious financial hit as a result of the hefty cost of developing and tooling up for the F-150’s aluminum body.

For its part, Ford eventually expects to be running the two truck plants flat out. They have a rated straight-time capacity of 700,000 units annually.