Ford Bringing New Focus RS to US for 1st Time 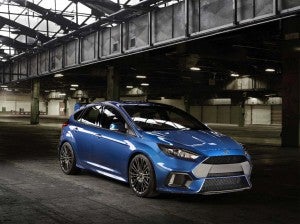 The new Ford Focus RS will make "in excess of" 315 hp, possibly quite in excess.

Ford will be giving compact performance fans a new option, the maker today rolling out an all-new version of its hot hatch Focus RS – and confirming will come to the U.S. market for the first time.

Part of an ambitious plan to significantly expand its presence in the performance market, the new RS will be one of the fastest and best-handling models in the Ford line-up, company officials promised during a preview staged in both Cologne, Germany and at Ford headquarters in Dearborn, Michigan.

“The RS is the next extension of our plan to bring out 12 (performance) vehicles,” said Joe Hinrichs, Ford’s President of the Americas, from the suburban Detroit end of the unveiling.

Set to debut in Europe sometime in 2016, and the U.S. after what one official called “a short delay,” the new Focus RS will feature a beefed up version of the maker’s 2.3-liter twin-turbo EcoBoost inline-four. Specific details were in short supply, though global product development director Raj Nair suggested the Focus RS will make “in excess of” 315 horsepower.

And that, other officials later added, would be for a “base” version. It is expected an even more powerful package will be added that could meet or exceed the 350 hp made by the prior generation Focus RS500. 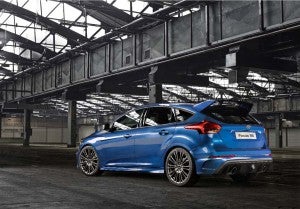 This will mark the first time Ford plans to ship the Focus RS to the U.S. market.

The new RS will share the same basic body as the more mainstream Focus ST 5-door, with a number of modifications made to improve body stiffness, handling and aerodynamics. Among other things, the exterior changes will help deliver more downforce to hold the hatchback to the pavement under high-speed maneuvers.

Ford officials noted that the new Focus RS will have an exhaust system not only tuned to enhance performance but to provide what Nair called “a signature soundtrack of burbles and crackles.”

But one of the more intriguing additions was described by Nair as a new “performance all-wheel-drive system with torque vectoring.”

Previous versions of the Focus RS put all their power to the pavement through the front wheels. The new model will, under ideal conditions, continue to direct 100% of its power to the forward axle, explained chief program engineer Jamal Hameedi. But it will be able to shift up to 70% of torque to the rear, as needed. And, using a twin clutch system, all of that power can be directed to the outer wheel to further improve cornering.

“It will even have the ability to do controlled oversteer drifts,” added global product chief Nair, something that should appeal to celebrated drifting champ Ken Block, who served as a consultant on the Focus RS development effort. 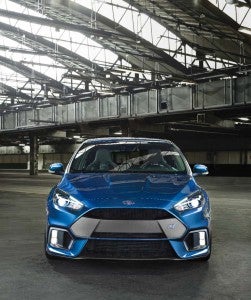 Ford plans only minor changes to the U.S. version of the RS to meet federal safety and emissions regulations.

Ford has been beefing up its overall performance program, last December announcing a new global unit overseeing the development of those 12 new muscle cars.

The logic is simple. In the U.S., performance car sales have increased by 70% since 2009, well ahead of the overall automotive recovery. Meanwhile, “Performance vehicles attract a younger and better educated customer,” stressed Nair. That not only translates into higher transaction prices and improved margins, but also puts a halo around the brand.

The new Ford Focus RS will go up against some tough competitors, notably the all-new Volkswagen Golf R and Subaru WRX STi. The Detroit maker also hopes to attract buyers away from more upscale competitors, such as Audi with the S4, and Mercedes-Benz with its European A45 AMG.

Ford first began using the RS badge on a version of its European Taunus model back in 1968. It was able to launch from 0 to 60 in 14.5 seconds, quick for the era’s small cars. In more recent years, RS variants have cut that launch time down to just over 3 seconds. Ford will hold back performance details – along with pricing information – until closer to the new Focus RS model’s launch next year.