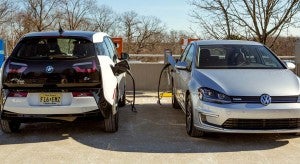 VW and BMW are teaming with ChargePoint to install 100 fast-charging stations on the East and West coasts.

Barring some explosion in demand – unlikely at a time when gasoline prices are plunging – sales of plug-based vehicles are expected to fall far short of the 1 million target set by President Barack Obama by the end of this year.

Industry analysts blame a variety of factors for the shortfall, including both the limited range of current battery-based vehicles and a shortage of quick charging systems. In an unusual alliance between erstwhile rivals, Volkswagen and BMW have teamed up with ChargePoint to install 100 fast-charging stations along both the East and West Coasts this year.

The goal is to set up the chargers along a series of heavily traveled corridors where demand is high and where the network would make it possible to travel greater distances without disruption, the makers explained.

The direct current fast chargers, also known as Level III chargers, would be spaced no more than 50 miles apart. They would allow an EV or plug-in hybrid capable of using the 440-volt system to get an 80% charge in as little as 15 to 30 minutes, depending upon the size of the battery.

Not all vehicles are currently equipped to use Level III systems, however. That includes the second-generation Chevrolet Volt revealed at this month’s Detroit Auto Show – though senior project officials have said they might add that capacity during the new Volt’s lifecycle.

ChargePoint already plans to add as many as 20,000 recharging stations across North America, though most will use the slower Level II system.

The BMW/Volkswagen project will focus on such high-traffic corridors as the stretch of I-95 running from Boston to Washington, D.C., as well as the I-5 route from Portland to Sand Diego.

Noting that a network of chargers could enhance the appeal of vehicles such as the BMW i3 and VW Golf-e models, Jorg Sommer, Volkswagen of America’s vice president of product marketing, said his company, “believes in a holistic approach in e-mobility to create a seamless experience for the consumer.”

(Click Here for details about Scion’s plans to regain its youthful allure.)

Until recently, there were only a handful of FastCharge facilities in the U.S., but there’s a growing push – backed, in part, by the auto industry – to expand availability. Battery-car start-up Tesla Motors is establishing its own network of so-called “SuperChargers” across the country and parts of Canada.

Automakers recognize that they are in a bind. Increasingly stringent fuel economy and emissions standards are requiring them to focus more on electrification and other clean powertrain technologies. But so far, only 280,000 plug-based vehicles have been sold in the States, sales last year along running around 120,000. So, the industry has to take steps to enhance the appeal of the technology by lowering costs, increasing range and making charging simpler.

But it’s not just battery-cars that need a jump-start. Both Honda and Toyota are putting up corporate cash to help subsidize the expanded availability of hydrogen for the fuel-cell vehicles they’re planning to introduce. The California government has also kicked in with a statewide hydrogen system subsidy. In Japan, the government plans to establish a network of hydrogen stations in time for the 2020 Olympics.