Witness to History: Nothing New Under the Sun

The demise of the steering wheel and other detours on the long road to autonomous vehicles.

A prototype version of the GM Unicontrol - note the center steering wheel hub is still in place.

It’s difficult to keep up with the headlines. If my count is right, we’ve already hear from Cadillac, Mercedes-Benz, Honda and Nissan, all revealing plans to introduce autonomous vehicles in the coming years. And that doesn’t even include Google, the high-tech firm that is putting a fleet of prototypes on the road this year.

We’re told that electronics can take over from drivers the drudgery and skill of safely and efficiently motoring from here to there, whether commuting across town or crossing from coast to coast. But, as is stated in the circa 300 BCE Old Testament Book of Ecclesiastes, Chapter One Verse Nine, “there is nothing new under the sun.”  And the rush to put self-driving vehicles on the road reminds us old-timers of that.

In 1958, I was a reporter for the Detroit Bureau of Business Week magazine, and witnessed the first steps on the long road to autonomous driving. The concept had been around for awhile. GM even promoted the idea at its lavish pavilion at the 1938 New York World’s Fair. Two decades later, it was ready to show us automotive scribes that science fiction was ready to become science fact.

Safety was becoming a serious subject, as more Americans took to the roads – especially the first of the new interstates – and the death toll soared ever higher. So, the maker offered a few ideas about how to make the highways safer. That included steps to de-fang abutments, guard rails, and other roadside hazards. 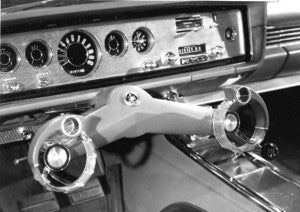 But GM also had a high-tech solution, its “Unicontrol” system, which replaced the familiar steering wheel with a stick — like those in many airplanes – to control acceleration, braking and steering.

(Is it time to say goodbye to the steering wheel? Click Here to find out.)

The automaker demonstrated what now might be seen the forerunner of autonomous driving: its Auto-Control System, an electric guidance cable, buried between two adjoining lanes of a yet-to-be anointed Interstate Highway.  GM announced that with Auto-Control  a motorist could go from Chicago to New York City without personally steering, braking or accelerating other than for pit stops.

With the federal government racing to build the interstate system, GM researchers eagerly awaited acceptance. But it was not to be, Washington’s Highway System bureaucracy brushed off GM’s buried cable concept.  Until the 1990s, anyway, when a short stretch of San Diego freeway was equipped with a similar technology as part of a pilot research program that included GM’s Buick division. 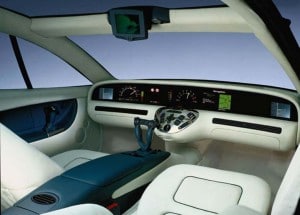 That system relied on buried magnets that could be tracked by a specially equipped vehicle using a trunk full of computer hardware. It was too costly and primitive to put into production, but it gave a hint that the concept wasn’t going to go away.

Curiously, what some believe might now vanish is the steering wheel. Except for a few early pilot vehicles, the Google autonomous prototypes will have no driver controls at all onboard, save for a panic button. But even here, the idea isn’t entirely new.

As a fairly recently licensed private pilot in 1958, I was fascinated by the prospect of operating highway vehicles pretty much like an airplane: pull back on the stick to slow, push forward to speed up, and tilt the stick to turn (in combination of course with rudder pedals).   Well, actually, when Chevrolet’s PR guys gave me a chance to drive a 1958 Chevy Impala convertible with Unicontrol, steering required a twist of the handle.

GM presented the Unicontrol and buried cable concept as a package in its 1958-model Autonomous Chevy as well as equipping its 50th Anniversary Firebird III jet-powered experimental car with both Unicontrol and Auto-Control Systems. 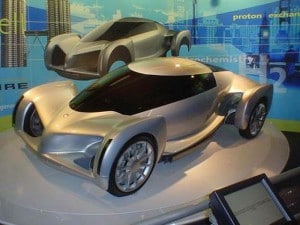 Along about the same time, one-time mega-supplier Bendix demonstrated a radar sender mounted in the grille of, as I recall, a 1956 Ford sedan.  The idea was the radar could warn the driver of immovable objects in its path, even applying the brakes – not-so-coincidentally a Bendix specialty.  Alas, it took another five decades to put that concept to practical use.

And, in 1965, I helped Lincoln-Mercury pedal a full-sized red convertible around the country for media drives with another departure from conventional steering:  the “Wrist-Twist,” which used two separate 5-inch wheels, rather than a single, conventional wheel.  My now 54-year-old oldest daughter still remembers “driving” it while sitting in my lap at the age of five.  Ford’s lawyers killed the idea, fearing it would fall victim to the new Federal Motor Vehicle Safety Standards or, worse yet, lead to lawsuits.

In 1996 at the Paris Auto Show, Mercedes Benz hawked a “concept car,” the SCL 600, which among other features presented a center-console-mounted handle VERY similar to GM’s 1958 Unicontrol.  There were no pedals for brakes or accelerator, either. 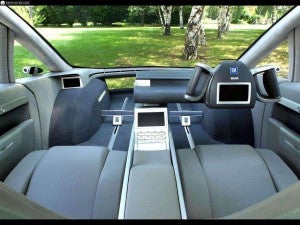 Like Ford's Twist-Steer, GM used dual controls on the Hy-Wire to replace the regular wheel.

GM itself came back with a twin joystick-like controller on its Hy-Wire hydrogen fuel-cell vehicle prototypes in 2002. It suggested the concept would be easy for a new generation of videogame-savvy drivers to adapt to. One of the more interesting updates was that this joystick-like controller could be used by both driver or passenger without changing seats.

So far, the steering wheel has proven surprisingly resilient. But perhaps Google will deliver the coup de grace if its autonomous prototypes prove successful.

Truly, “there is nothing new under the sun.”  And many of the ideas for autonomous cars can be dated back to at least the 1950s, demonstrating how long it takes to get from visionary idea to practical application.