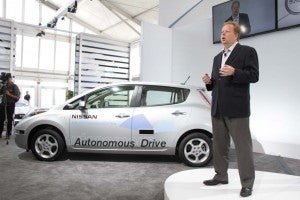 In an unexpected move, top Nissan executive Andy Palmer has left the Japanese maker for a new position as CEO of Aston Martin. The British luxury maker has been without a CEO since 70-year-old Ulrich Bez retired last November.

The move comes at a significant time for Aston which had been hit hard by the global economic recession. The maker recently lined up additional funding intended to help it launch the most aggressive product program in its history.

But the departure of 51-year-old Palmer comes at something of an awkward time for Nissan which has seen several other high-profile departures recently, including the loss of Infiniti global chief John de Nysschen who last month became the new head of Cadillac.

“Andy was fantastic,” said a well-placed Nissan insider asking not to be identified by name, but he said it was clear that the opportunity for Palmer to return to his home country after 13 years – and to take over a company like Aston Martin – was too good an opportunity to resist.

Aston is at a critical juncture right now. The company has been struggling ever since being sold off by Ford Motor Co. in 2007 to a group of investors including Kuwait’s Investment Dar and Adeem Investment. Italian equity fund Investindustrial took a 37.5% stake in December 2012, while Germany’s Daimler AG acquired 5% and has announced a joint venture with Aston that will offer the British maker a new generation of high-performance powertrains.

In May, meanwhile, Aston announced its biggest investment program ever, a plan calling for it to spend $845 million on new products and to expand its current assembly operation in Gaydon, England.

The luxury maker has already begun to show off what it has in store, introducing the fastest cabriolet model in its history and re-launching the long-dormant Lagonda sub-brand.

Palmer will take over the CEO spot – which has been open since last November — “after he completes a transition period from his current employer,” Aston said in a statement.

“We’re delighted that Andy will join us as our new CEO at this important time at Aston Martin,” the company said. “Andy’s wealth of experience on the global automotive stage in marketing and sales, engineering and technology, and luxury and brand management will be instrumental in taking Aston Martin forward through its most significant and ambitious period of investment to date.”

The British executive began his automotive career as a 16-year-old apprentice with supplier Automotive Products Limited in 1979, joining Austin Rover in its transmissions department seven years later. He was signed by Nissan in 1991, and has been in Japan as one of the senior lieutenants of CEO Carlos Ghosn since 2001, shortly after the Japanese maker went through a major reorganization and entered into a deep alliance with France’s Renault.

“He was clearly one of our top guys,” said the Nissan insider, and one of a handful considered possible successors to Ghosn – who has so far declined to set a date for his own retirement.

Palmer wore a number of hats with Nissan, including that of Chief Planning Officer, as well as Executive Vice President and Member of the Executive Committee. Significantly, it was Palmer who announced a year ago that the Japanese maker planned to put a fully autonomous vehicle into production by 2020.

He was named the automotive industry’s most influential British executive by Auto Express magazine in 2013, as well as the world’s third most influential Chief Marketing Officer by the CMO Influence Study, conducted by marketing firm Appinions for Forbes magazine.  Interbrands, meanwhile, credited Palmer with “elevating marketing to a science.”

How much of an impact Palmer’s departure will have remains to be seen, but the Nissan source said the impact should be blunted by the fact that, “we have a deep bench of talent in the company.” That includes Philippe Klein, who has been working on the Renault side of the Euro-Asian alliance. Already having served two stints in Japan, he will now move to Nissan’s corporate headquarters in Yokohama to replace Palmer.

Nissan has had to fill a few key spots lately, including the top position at Hong Kong-based Infiniti left open by the sudden departure of Johan de Nysschen, who is now running Cadillac. Infiniti also lost its European chief Fintan Knight. A year ago, another potential successor to Ghosn, Carlos Tavares, was summarily ousted after giving an interview in which he said he might be open to other options, such as becoming CEO of General Motors. Tavares has since taken over as chief executive at France’s struggling PSA Peugeot Citroen.

(For more on de Nysschen’s move to Cadillac, Click Here.)