Big things in a smaller package. 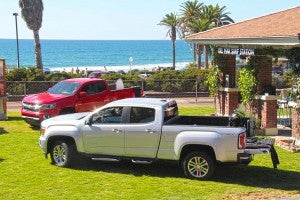 GM is jumping back into the midsize truck market with the Chevrolet Colorado and GMC Canyon.

When General Motors pulled the plug on its old Chevrolet Colorado and GMC Canyon models a few years back, it looked like the midsize truck segment was getting ready to be taken off life support. At one time, back in the 1980s, U.S. buyers bought more small pickups than full-size models, but that flip-flopped in subsequent decades and, with sales sliding, seemingly towards oblivion, General Motors followed Chrysler and Ford towards the exit door.

But the biggest of the Detroit makers wasn’t quite ready to drive off into the sunset – not with archrival Toyota, as well as smaller Japanese maker Nissan, picking up whatever demand was left in the midsize truck market. GM had other plans in mind, revealing it would be back with two all-new trucks for 2015.

Rather than just rehab its old pickup platform, GM set out to do a complete redesign. What its come up with is something of a hybrid, starting out with the best attributes of the global midsize truck it offers in markets as diverse as Thailand and Brazil and blending them with the rugged, U.S.-centric Chevy Silverado and GMC Sierra full-size pickups launched late last year.

For the legions of skeptics, GM is already getting a good laugh. It claims to have over 30,000 orders already in hand, while more than 100,000 potential buyers have checked the new 2015 Chevrolet Colorado and GMC Canyon models on their configurator pages, more than the brands have ever logged before for any new model, according to Chevy-side marketing manager Sandor Piszar. 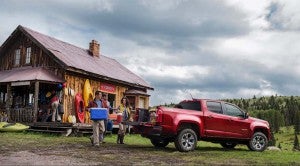 The 2015 Chevrolet Colorado is GM's new entry into the midsize truck market. The Colorado competes with entries from Japanese makers.

Curious to see why there’s so much buzz building up, TheDetroitBureau.com jumped at the opportunity to test drive the new midsize models during a couple days ensconced in tony Del Mar, along the Pacific surf north of San Diego.

What we discovered was impressive: General Motors has redefined the midsize truck segment and, with a mix of good mileage, plenty of new features, better maneuverability and reasonable pricing, the maker has a very good chance of not just taking down its Asian rivals, but also of bringing back some buyers who have migrated to either full-size trucks or the utility vehicle segment.

Now, when we talk about GM delivering a “small” truck that has to be put into perspective. On the whole, products available in the U.S. automotive market today have grown substantially over the decades. The old Chevy S10 – and the Toyota Tacoma – were truly tiny by comparison. During our wanderings around San Diego County we happened upon the original “full-size” Toyota T-100. It was dwarfed by the new GM trucks.

The 2015 Chevrolet Colorado and GMC Canyon siblings sport a wheelbase of 128.3 inches in Extended and Crew Cab configurations, 140.5 inches with the longer cargo bed. Its total length runs from 212.7 to 224.9 inches from nose to tailgate, depending on model. They run about 70 inches in height, and all configurations are 74.3 inches in width. 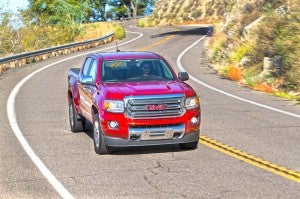 That said, the longest Canyon is still a half foot shorter than the smallest Silverado. And it only takes a few minutes behind the wheel to appreciate this. Unless you truly need all the interior and cargo space of a full-size pickup, the new midsize models have some critical advantages.

They are, among other things, garageable, something many folks can’t achieve with the Silverado or Sierra. On the road, the new midsize trucks are more manageable, one might almost be tempted to use the term, “nimble.” No, they don’t offer sports-car handling, but they can be flogged around corners with reasonable aplomb and you don’t feel like you need to drop a boat anchor when coming to a fast stop.

This controlled ride is also a a surprisingly quiet one. Unless you’re flogging the four-cylinder version at wide-open throttle, there’s no shouting over road, wind or engine noise, even when talking to the person in the opposite rear seat.

Steering is pleasantly precise, a bit firmer than a typical Chevrolet passenger car, and offers a balance between isolating road jounces while still providing much appreciated road feel.

The big truck market has, of late, been experiencing some of its fastest growth in a decade. The recovery of the U.S. economy has helped, as has the decline in gas prices. That said, full-size pickups still suck down gas with an unquenchable thirst. So, for those who would don’t want to be on a first name basis with their local service station owner, the 2015 Chevrolet Colorado and GMC Canyon models will have additional appeal. 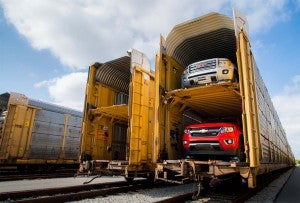 GM claims to have 30,000 orders for its new midsize trucks and they're on the way to dealerships now.

Making 200 horsepower and 191 pound-feet of torque, the smaller engine is no rocket, but it launches off the light with reasonable aplomb. Buyers should be particularly impressed with the I-4’s fuel economy numbers, an EPA-rated 20 mpg City, 27 Highway.

The V-6, meanwhile, pumps out 305 horsepower and 269 pound feet and delivers a solid sense of acceleration when you’ve not got a trailer in tow. At 18 City/26 Highway in rear-drive configuration, and 17/24 in the all-wheel-drive model, it’s delivering a clear mileage advantage over Chevy and GMC full-size models – and the import midsize models.

Going forward, Chevy and GMC will bring out a new diesel alternative about a year from now. While official numbers haven’t been released, insiders hint they’re hoping to see a highway figure that could nudge above 30 mpg, a definite segment benchmark.

Best-in-class is a term that fits the new trucks in a number of ways. Interior refinement is a case in point. The current Toyota Tacoma and Nissan Frontier models are absolutely Spartan by comparison, both in terms of material choices and features. 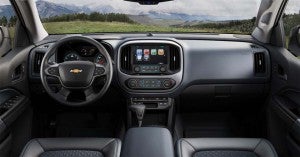 The interior of GM's new midsize trucks are extremely quiet and feature a wealth of convenience features.

The instrument panels are modern and well laid out, with a nice video display that can be configured with the latest voice-activated navigation system – and with a 4G LTE WiFi hotspot. The optional display is an 8-inch touchscreen that makes it easy to operate the Chevy MyLink infotainment system or the GMC alternative.

(Fiat and Mitsubishi teaming up on new midsize pickup. For more, Click Here.)

The two trucks are largely identical, but the brands have tried to offer as much differentiation as possible. The Chevy features a more smoothly sculpted body, the GMC adopting a little more edgy look, including scalloped front and rear fenders. And the Canyon adopts a more well-appointed interior.

But they share such useful details as the integrated cargo bed step-up with a handhold built into the top of the cargo bed. There are also 13 adjustable tie-downs, and the tailgate has an easy-lift feature, while it is damped while being lowered.

(Click Here for details on the name for Cadillac’s new flagship: CT6.)

For many buyers, it comes down to the bottom line, and where the base Silverado comes in around $34,000, you’ll be able to drive off with a stripped-down Chevrolet Colorado for $20,995. Loading up the I-4 model with a modicum of gear will push you into the $25,000 range, and a fully-loaded GMC Canyon with the Crew Cab and 6’2” bed will take you across the $30,000 threshold. Nonetheless, the prices are highly competitive with both the midsize competition and the industry’s full-size alternatives.

(To see more about the Ferrari trunk recall, Click Here.)

General Motors has scored a hit with the new 2015 Chevrolet Colorado and GMC Canyon siblings. These new models could, almost singlehandedly, pump new life into the midsize pickup segment. They’re also likely to force the competition to up their game, Toyota, for one, planning to bring out an all-new version of its aging Tacoma a year from now. Nissan is also said to be working on a Frontier update, and Honda is scurrying to redesign its now-absent Ridgeline.

As for Ford and Chrysler? We keep waiting for them to re-commit to the midsize market. For now, they seem to be playing a waiting game, watching to see if the new Colorado and Canyon models pull things off. Initial signs suggest they’ll be well-received. And they should be. Calling a new vehicle a game-changer risks resorting to cliché, but these two new trucks certainly seem to qualify.