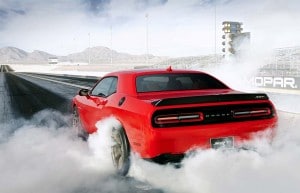 At 707-hp, the 2015 Dodge Challenger SRT Hellcat claims to be the most powerful muscle car ever to roll out of a Big 3 plant.

If you thought the golden age of muscle cars was gone and forgotten, Dodge has a big surprise coming for you next year — actually, a whole bunch of them.

After bringing back its retro-styled Challenger coupe in 2009, the Chrysler performance brand has made steady gains on the stalwarts of the modern muscle car era, the Ford Mustang and Chevrolet Camaro. And for 2015, Challenger is getting not only a major design update, but a host of new variants including the new SRT Hellcat which, at a smoking 707 horsepower, is being billed as the most powerful factory- assembled muscle car ever.

While modern muscle cars aren’t for everyone, models like the Challenger are gaining traction not only with the Baby Boomers who grew up listening to the squeal of rubber, but also younger buyers looking for something out of the ordinary.

Though the new Dodge Challenger may maintain its old-is-new design language, that appeal is enhanced by some very contemporary features, including the latest take on the Chrysler U-connect infotainment system. Top to bottom, the coupe’s technology, safety features and creature comforts move the Challenger into the rarified territory reserved for exotic super cars. 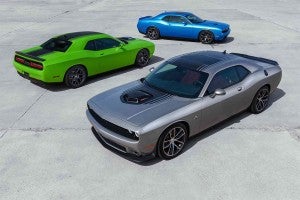 Three other members of the 2015 Challenger family, the SXT, the RT Shaker and the 392 Scat Pack Shaker.

But as TheDetroitBureau.com quickly realized during a day of driving the various Challenger models, it’s still all about performance. And with not only 707 hp but 650 pound-feet of torque, the new Hellcat poses a serious challenge to such alternatives as the new Camaro ZR1.

(For more on what’s under the Hellcat’s hood, Click Here.)

It doesn’t come cheap, at around $60,000, but for those who can’t stand looking at taillamps when the light turns green, there are few alternatives. There’s been some debate over what that delivers, but something in the mid to high 3 second range seems to be on target, depending on how good you are with the shifter.

Yet what impressed us just as much was the drivability of the Hellcat under less aggressive maneuvers. The cabin, despite the ferocious and carefully modulated noise that comes from the tailpipe, is quiet and the ride surprisingly comfortable.

Yes, You’ll feel the raw power coursing through the car while idling, but everything from the electronic engine and stability controls to the suspension, shock absorbers and engine mounts have been brought into play to keep the car’s raw power under control while awaiting the driver’s command. 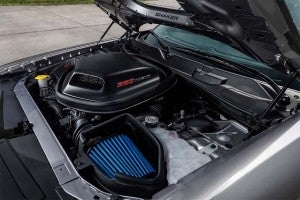 Under the hood of the 392 Scat Pack Shaker.

And that underscores the difference between today’s muscle cars and those of the ‘60s and ‘70s golden era. They were loud and brutish straight line rockets.  The new electric power steering in the 2015 Dodge Challenger SRT Hellcat gives you precise and welcome control. And when it’s time to scrub off speed you can call on a set of massive Brembo brakes. There are six-piston calipers with 15.4-inch rotors up front, with four-piston grabbing 13.8-inch rotors in the rear.

Dodge pulled out all the stops, however, when it came to delivering he maximum muscle out of this 6.2-liter Hemi V-8. While it shares many of the basics with the Challenger 392, SRT engineers claim it’s got 91% new parts, from the larger fuel line to the forged steel crankshaft, forged alloy pistons and aluminum alloy cylinder heads.

To handle all that power, meanwhile, Dodge had to pull off some minor miracles upgrading its two gearbox options, including an 8-speed automatic. It takes a bit of learning – and leg muscle – to handle the clutch, but traditionalists are likely to opt for the 6-speed manual. 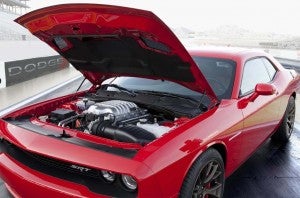 SRT engineers claim that 91% of the parts in the 6.4-liter Hemi in the Hellcat are unique.

For those who don’t quite need 707-hp for their morning commute, Dodge is offering a variety of other Challenger packages for 2015, including the SXT with its 305 horsepower V-6. This $27,000package is paired with that eight-speed automatic, and delivers the sort of fuel economy numbers one likely wouldn’t associate with a muscle car – a 30 mpg combined fuel-economy rating.

Then there’s the Challenger R/T Scat Pack, which gets a naturally aspirated version of the 6.4-liter V8 Hemi, here churning out a more than respectable 485 horsepower and 475 lb.-ft. of torque. That’ll still launch you from 0 to 60 in the low 4-second range while yielding up to 25 mpg on the highway, all for a starting U.S. MSRP of$38,495.

(On track and under the hood of the new 2015 Ford Mustang. Click Here for more.) 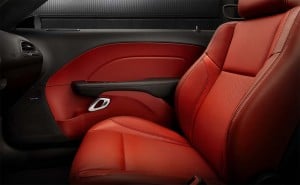 The 2015 Challenger gets a major interior upgrade.

While performance is what you’re looking for in a muscle car, looks still matter, and the 2015 Challenger offers a blend of intimidating style. The exterior continues to follow the lines of Challengers from the early 1970s, one of the strongest designs produced in Detroit after World War II and before the oil embargo of 1973. It’s bold, strong and effectively communicates the car’s intrinsic power.

But the 2015 Challenger is not blindly retro. Dodge has used lighting, including front LED accents, to give the classic shape a more modern appearance.

The interior also has been overhauled, down to such details as the bezel around the instrument cluster. And the materials used throughout the cabin have been updated to give the coupe not only a more modern, but more expensive look and feel.

Ergonomics have been improved, something essential considering the suite of technology that turns the Challenger into a vehicle as modern as almost any found on the road today. The center stack includes an 8.4-inch touch screen – complementing the 7-inch instrument cluster display — as well as the U-Connect system, which offers easy access to mobile connectivity, as well as music and navigation and a special Dodge Challenger voice recognition technology. 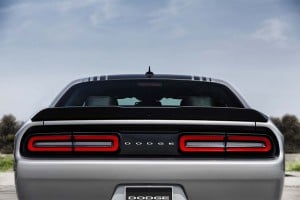 The look may be retro-tinged, but the 2015 Dodge Challenger gets modern touches like LED lighting.

There is also a media hub with USB and SC Card slots. In addition, the 2015 Challenger gets an array of driver assistance technology – optional on some models, standard on others — such as a back-up camera, blind spot detection, forward collision alert and adaptive cruise control, emergency calling capability and rain brake support and ready alert braking.

Muscle cars aren’t for everyone, but with its new level of refinement and sophistication, the broad 2015 Dodge Challenger line-up significantly expands its potential market. And for those who want the ultimate in performance, the Hellcat is clearly about to make Dodge’s competitors nervous while winning over some new converts.