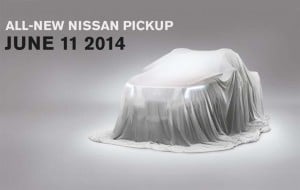 It could be a big year ahead for Nissan in the truck category. The maker has already confirmed that it will unveil an all-new version of its full-size Titan at the 2015 Detroit Motor Show, and now it is sending out a Twitter heads-up alerting the world that it will pull the wraps off a second pickup next week.

“There’s a special member of the #Nissan family on the way. Due date: June 11th,” the maker revealed, adding an image of a gauze-covered truck that TheDetroitBureau.com has confirmed is the next-generation Frontier model.

“The Nissan Frontier is a very important part of the Nissan lineup and of our truck growth strategy for the U.S.,” the maker responded to a query from TheDetroitBureau.com. “We remain committed to midsize pickup segment where the U.S.-built Nissan Frontier is the second-best selling truck in the market.  Here in the U.S., we’re gearing up for next year’s launch of the all-new full-size Nissan Titan.”

Significantly, the launch will be held abroad, and is expected to get relatively minimal play here in the U.S., reflecting the fact that the new model – sold overseas as the Nissan Navara – won’t arrive in American showrooms for more than a year after the global launch.

It is nonetheless worth paying close attention to considering the fact that the U.S. midsize pickup segment is showing more signs of life than at any time in more than a decade. The next-gen Nissan Frontier will be going up against not only its traditional rival, the Toyota Tacoma, but also two new entries from General Motors which is getting back into the midsize market with its all-new 2015 Chevrolet Colorado and GMC Canyon models.

And Honda plans to return with an all-new version of its crossover-based Ridgeline in 2016. It had originally indicated it would get out of the midsize segment this year. But industry analysts are cautiously betting that a wave of new product could help revive the moribund market which has lost most of its momentum to full-size trucks.

Nissan has largely missed out on the big truck boom, however, the Titan lagging way behind Detroit’s entries and even the sluggish Toyota Tundra. So the January debut of an all-new Nissan pickup will be particularly big news, the maker’s global product chief Andy Palmer confirming the unveiling during an April appearance in New York.

The next Nissan Titan is expected to be bigger, more powerful and feature a much broader range of options and upgraded capabilities.

Expect some similar improvements with the midsize Nissan Frontier, several sources suggested. For the moment, the maker isn’t saying much beyond what one can glean from this teaser image, which reveals a new grille design and LED running lights, as well as the new truck’s roof rails.

That said, the maker cautioned that, “The teaser image of a pickup truck released recently by one of Nissan’s overseas markets is not an indication of a new Nissan Frontier for the U.S.”

We’ll apparently have to wait for June 11th to find out more details – and even then, Nissan will focus on the Navarra models for global markets, likely making us wait a little bit longer for specifics about the American Frontier.