"The sound is (still) a distinct part of the thrill." 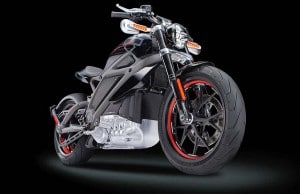 The Harley-Davidson LiveWire prototype would be the maker's first electric motorcycle.

If the thought of a Harley-Davidson brings to mind not an image but a sound, the ear-splitting, trademark chug of its motorcycles’ exhaust, you may soon be in for a big – if not necessarily quieter – surprise.

The Milwaukee-based manufacturer has taken an unexpected leap into the future with the unveiling of its first electric bike, developed as part of its top-secret Project LiveWire. Harley officials gave the media a preview of the new LiveWire this week, with a select public audience invited for a look at the first hand-built prototypes in New York next Monday. It’s part of a program designed to help Harley shape the bike it hopes to put into production in a couple years.

“America at its best has always been about reinvention,” said Matt Levatich, Harley’s President and Chief Operating Officer. “And, like America, Harley-Davidson has reinvented itself many times in our history, with customers leading us every step of the way. Project LiveWire is another exciting, customer-led moment in our history.”

Whether motorcycle riders really want a battery-powered bike, especially from Harley, is a question of debate, however.

Harley is one of a growing number of manufacturers entering the market for two-wheeled battery vehicles, but analysts caution that the venture is nonetheless risky because the largest demand comes at the low end of the motorcycle and scooter spectrum, and primarily in markets like China where those battery vehicles offer a clean, efficient way to get around crowded urban streets. 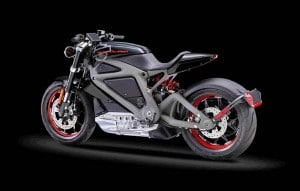 Until now, the American market for full-sized battery bikes has largely been limited to a handful of smaller players, notably California’s Zero Motorcycles, which is hoping to sell just 2,400 of its electrics this year, barely 1% of Harley’s 2013 sales of around 260,000 gasoline-powered motorcycles.

But a recent study by Navigant Research suggests Harley may be onto something. It anticipates that sales of electric motorcycles worldwide will grow to 1.2 million this year, along with 4.1 million battery scooters. Navigant also forecasts that the two biggest regions for growth in the years ahead will be Europe and North America, with a predicted compound annual growth rate of 30% annually through 2023.

Levatich and other Harley officials admit there’s a lot of room for improvement in electric motorcycle technology, and they also concede demand is likely to be small at first, but insist there is significant long-term potential.

“We think that the trends in both EV technology and customer openness to EV products, both automotive and motorcycles, is only going to increase, and when you think about sustainability and environmental trends, we just see that being an increasing part of the lifestyle and the requirements of riders,” said Levatich.

Harley plans to get as much feedback as possible from potential customers over the next couple years, kicking the effort off with a tour down Route 66, and then expanding into Canada and Europe in 2015. It has even created what it calls Jumpstart, a simulated riding experience.

Harleys have long been known for their distinctive exhaust note, which some compare to the sound of a baritone saying “potato-potato-potato.” With the Livewire prototype, “The sound is (still) a distinct part of the thrill,” contends Harley Chief Marketing Officer Mark-Hans Richer, though he compares it more to a “fighter jet on an aircraft carrier,” a distinct turbine-like whine from its one-speed gearbox.

The battery bike also offers what Harley calls “tire-shredding acceleration,” launching from 0 to 60 in less than four seconds, putting it more in line with some of the faster European and Asian “crotch-rockets.”

Another potential selling point is the fact that by mounting the batteries underneath the electric motor, the LiveWire bike offers a lower center of gravity expected to improve high-speed handling.

The downside is that the 10 kilowatt-hour lithium-ion battery pack delivers only around 130 miles range per charge. With a 220-volt charger, it would still need as much as an hour to be fully ready to go again.

Harley isn’t saying precisely when a production version of the LiveWire prototype will reach showrooms, though it hints it could be ready in a few years if it gets the right feedback from consumers and can deliver the sort of performance, range and price that they’d expect.