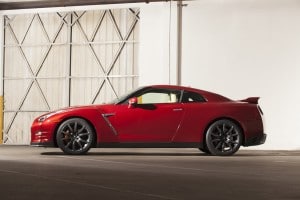 The world’s most memorable cars are often just that because of their exterior appearance or more precisely, the paint. It’s the first thing that catches the eye whether of a prospective buyer or a simple admirer.

Nissan seems to get it. It’s added a special tweak to the paint on its 2015 GT-R sports car and it caught the eye of many at its recent event for the new racer: gold…real gold. The Japanese maker added gold flecks to its “regal red” giving it a golden sparkle in bright sunlight.

Perhaps just as important as getting the color right on a high-end vehicle is ensuring it remains unblemished over time. The sun and the elements can significantly impact a vehicle’s paint over time. However, Ziebart has a new product designed to offset the impact of Mother Nature: a proprietary paint protection film known as “Z-Shield.”

Z-Shield is a plastic film smartphone protector, except this paint protection film is almost as smart as your phone. The company is introducing the new product in concert with its 55th anniversary this year.

“It’s an optically clear film protection for all or any part of your vehicle that is formulated to resist chips and marks from stones and road debris,” said Daniel C. Baker, president of Ziebart Corp.

“We have gone to great lengths to test this product, we have field-tested this product in harsh winter conditions and in the burning heat of Middle Eastern deserts and it has exceeded expectations.”

(Click Here to see how long it took Mazda to sell out of its 25th anniversary edition Miata.)

The Z-Shield film comes in gauges of .6 mil and .8 mil and carries a national warranty backed by Ziebart. The film will be introduced in Michigan first and then roll out to the rest of the country. Pricing information wasn’t available.

(For more about the new battery-car sharing program in Indianapolis, Click Here.)

The .6 mil film has been engineered and manufactured to “self-heal” from minor scratches, such as abrasions from automatic car washes and keeps paint finishes looking new. It also boasts UV protecting properties, is optically clear and won’t fade or yellow.

The film can be applied to certain areas of a vehicle, like the hood or doors or the entire vehicle. One area it may be particularly appealing for is the rear bumper top to guard against scratch marks from hauling things in and out of the trunk.